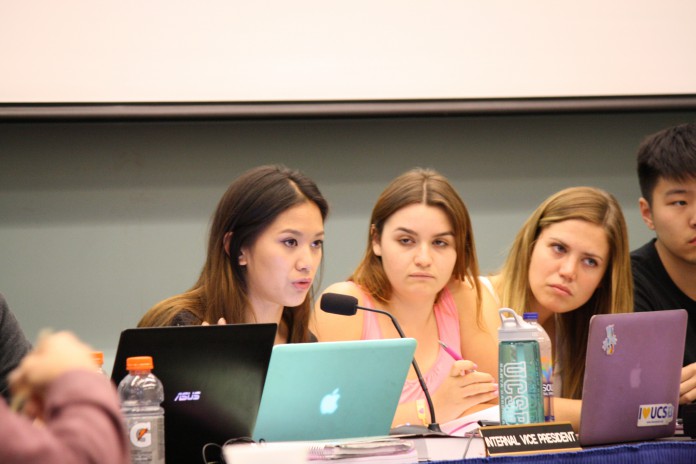 The University of California, Santa Barbara Associated Students Senate discussed A Resolution to Divest from Companies that Profit from Human Rights Violations in Palestine/Israel at their April 1 meeting. The resolution, authored by off-campus senator Xin Ma and on-campus senator Steven Kwok, was sent to AS External Affairs Committee.

“We are one of the last two UCs to pass a resolution of this manner,” said Ma. “The current occupation of Palestinian land in Israel is a problem globally… I want to clarify that in no way is this resolution anti-Semitic. This is just a resolution seeking Palestinian liberation and to be in solidarity with Palestinians.”

According to the resolution, the University of California Student Association passed a resolution that recognized the legitimacy of divestment as an important social movement tool, and “encouraged all institutions of higher learning to cleanse their investments portfolios of investment companies, supporting or profiting from violations of international human rights law, as unethical, without making special exemptions for any one country.” The resolution also states that the current investments of the UC “demonstrate complicity in the occupation of Palestinian Territories without consent of the student body.”

During public forum, nine students gave a presentation in favor of divestment, which detailed the history of colonialism and the apartheid in Israel. Kaur further supported divestment.

College of Engineering collegiate senator Jonathan Rothschild asked Kaur if she denounces “movements that seek to undermine the rights of Jews for self-determination in their ancestral homeland,” to which Kaur replied that the question was irrelevant to the resolution.

Off-campus senator Michelle Moreh stated that Palestinian human rights activists, such as Bassem Eid, have denied the existence of an apartheid in Israel, and asked Kaur if their voices should be disregarded.

“We are critiquing apartheid policies in the same way that students in the past have critiqued Jim Crow, have critiqued Japanese internment,” said Kaur. “I think that is in no way can be conflated to say that we are silencing student voices. I think it is very valid to be critical of governments.”

Several students attended public forum to speak  in support of A Resolution Condemning Anti-Semitism, authored by off-campus senators Michelle Moreh and Izeah Garcia. Among these students was fourth-year biochemistry major and president of the Muslim Student Association Yasmin Sallak.

“I want to do my part to make sure Jewish students feel safe expressing their identities, and that depends on this campus,” said Sallak. “Falling under the umbrella of anti-Semitism are marks of speech or actions that pertain to the state of Israel. Rhetoric that encourages the demonization of Israel through the comparison of Israel to Nazi Germany, or a delegitimization of its very existence, for example, is unacceptable… There is a significant difference between criticizing the being of Israel and critiquing Israeli policy.”

Also in attendance was third-year history and religious studies double major Arezu Hashemi, who spoke in opposition to the resolution to divest.

“This resolution is not a vocal initiative,” said Hashemi. “It is part of a bigoted global movement against Israel public: Boycott, Divestment, and Sanctions, or BDS. The BDS movement sells itself as a movement for justice and human rights, but in reality it calls for the elimination of Israel and the violation of Jewish rights and self-determination.”

Hashemi stated that the resolution propagates the BDS movement and, though it may not be its original intention, it is anti-semitic.

“Criticizing Israel is not anti-Semitic,” Hashemi said. “As a Jewish-American woman, I am criticizing Israel and its actions almost every single day. But questioning the right for Israel to exist, calling for its elimination, and denying the Jewish people their right to self-determination—that is anti-Semitic.”

The resolution was sent to External Affairs Committee, and it will be voted upon in the coming weeks.