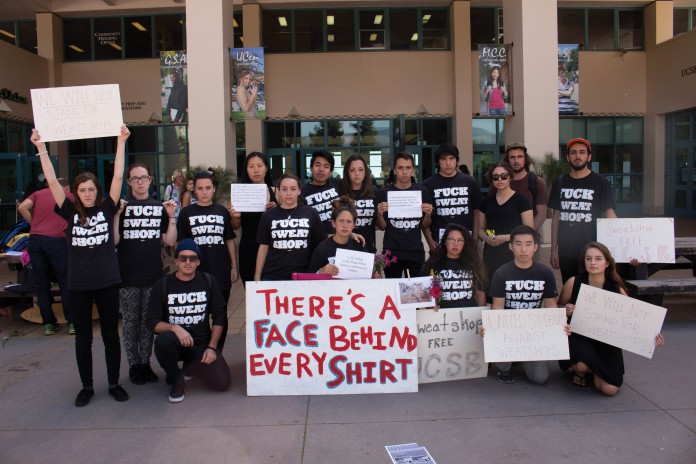 To inform students about the conditions that workers in the garment industry experience in locations like Bangladesh and to promote the adherence to fair labor laws, students from the University of California, Santa Barbara participated in a die-in in front of the UCen. The event, organized by the United Students Against Sweatshops, was held on Feb. 26.

Participants sported black clothing with the text “Fuck sweatshops” and signs that read statements like “Sweatshop free UCSB” and “We refuse to stand for sweatshops.” Third-year global studies major and USAS member Brandon Yadegari mentioned that one of the long-term goals of USAS is to inform the population of what occurs in sweatshops around the world.

“USAS plays a major role in educating the general student population specifically with regards to labor issues and substandard labor conditions for the majority of garment workers,” Yadegari said.

The day before the die-in, Executive Director of the Worker Rights Consortium Scott Nova gave a special lecture to students at the Multicultural Center.

“All of the actual production of [major brand] garments is done by contracted factories in Latin America, in various parts of Asia, to some extent in Africa, and the Middle East,” said Nova. “This dynamic of this process of outsourcing garment production has been an extremely effective tool by brands and retailers to reduce production costs and increase profits. Instead of paying workers in the United States $16 or $20 an hour, garment brands and retailers have clothing made by contracted manufacturers who pay garment workers in Bangladesh 33 cents an hour or 15 cents an hour.”

Die-in participants laid down alongside funeral flowers to portray the thousands of deaths that have resulted from unfair labor conditions around the world. Some of the major sweatshop incidents that the event highlighted included the 2013 Rana Plaza disaster in Bangladesh, where over 1100 people died when the building collapsed.

First-year undeclared major Kate Columbus expressed her thoughts on the current garment system and the deaths that have resulted from it.

“It’s hard to believe that practically all of the clothes we wear, hundreds of people have put effort in making them and many of [these people] have died just because we want a new pair of shorts or a new dress,” Columbus said.

The event lasted for two hours, spanning from 1 PM to 3 PM. Passersby stopped to read the informative stands around the event, and some grabbed signs and participated as well.

“I want to be sure that all that I buy from UCSB is made by people who are getting fair pay and are working in conditions that I myself would like to work in,” Gray said.

One of the main objectives of USAS is getting UCSB to join the Accord on Fire and Building Safety in Bangladesh. Currently, most UCs are in the Alliance for Bangladesh Worker Safety. Yadegari described the difference between these agreements.

“The Accord and the Alliance represent two reactions to a pretty dire situation specifically in the country of Bangladesh in Southeast Asia,” Yadegari said. “The Alliance is a non-binding agreement. There is no mechanism to hold anyone accountable legally in the Alliance. [In] the Accord, there’s very specific language in there that covers things like financial support for factory upgrades and improvements for example.”

In regards to the UCSB bookstore’s association with manufacturing policy, Yadegari expressed some frustration.

“Working with the bookstore can be difficult, but they are willing to sit down and talk with us about these problems,” Yadegari stated. “We are having some trouble getting access to the data as far as how much in revenues are coming from certain manufacturers, where manufactures are producing, this and that. These should be fairly transparent things.”

Yadegari stated that he hopes the die-in will push students to participate in making a worthwhile change.

“We wanted the [die-in] to be a seed in people’s minds,” Yadegari said. “We hope that a lot of people saw it and understood that people were figuratively dying in solidarity with workers that actually have died and that may have possibly touched the clothes in our bookstore.”

If you wish to become a part of USAS, they hold their meetings Monday nights at 8 PM in the Social Sciences and Media Studies 2001.