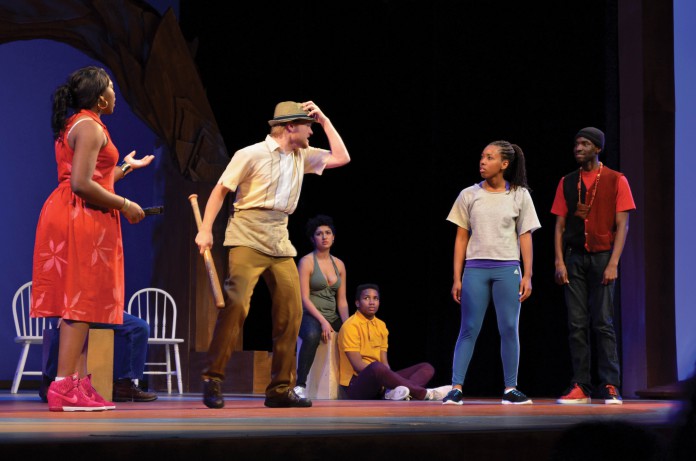 Tarell Alvin McCraney’s play In the Red and Brown Water, currently playing at University of California, Santa Barbara’s Hatlen Theater, takes storytelling elements from Yoruba mythology and Louisiana Voodoo folktales, to showcase a community that is often overlooked by many of us. Set in a Louisiana bayou housing project, this play portrays the difficulties of being African-American and having to deal with a future that may have already been decided for you. Indeed, one of the recurring issues of the play is the allure of escaping the projects, and in essence overcoming a fear that many of us face: staying home for the rest of our lives. It presents characters that are complex and relatable, who join together to create a enthralling coming of age story.

The story is about a young track star named Oya (played by Joré Aaron-Boughton) and her decision to stay at home when presented with the opportunity to leave. Aaron-Boughton does a fantastic job in moving around stage, her physicality an indication of her status as a track star. Instead of leaving, she chooses to stay in the projects in order to take care of her ailing mother, Mama Moja (played by Zurian Zarate). She foregoes ambition and success and instead chooses family and responsibility. What seems like the morally-correct move turns out to be the main source of unhappiness for Oya for the majority of the play. Although Oya’s intentions are good, she unwillingly sentences herself to a future she thought she could escape. It’s a harsh reality that keeps presenting itself throughout the story and that we’re constantly reminded about through the use of explicit language and sexual themes, such as the decision between passion or love.

The actors do a fantastic job in portraying the complex characters of the story. At first, it might seem as though the characters are one-sided, generically good or bad; however, after a few minutes of them onstage, you realize that these are human beings with faults and redeeming qualities. Shango (brilliantly portrayed by Rigoberto Sanchez) looks like a sleazy gangster in the beginning, but is revealed to have genuine concerns about the well-being of others. Elegba (played by Charles Grant) appears to be a harmless kid at first, until you realize he’s far from innocent.

An important quality of the play revolves around dancing and singing. There are several surreal sequences within the play that are particularly outstanding. The most emotional moments occur in the first half of the play, and are significant because of the amazing choreography and singing that accompany.

Director Shirley Jo Finney and choreographer Christina McCarthy do an amazing job in using the whole stage to their advantage. The show is performed in the versatile Hatlen Theater, so there is not a restriction of space that has been seen with previous productions. A scene based around one of Oya’s track meets serves as a prime example: instead of having the actor run across the stage, Finney and McCarthy created a dance that exhilarates the audience with its fast motion and loud sounds. Scenic designer Frederica Nascimento creates a memorable ambiance that elicits a good representation of a Louisiana housing project. Vickie J. Scott’s work with lighting should be celebrated as well. Colors are successfully used alongside voice and physicality to portray more than the actors could accomplish alone.

One particularly unique feature of In the Brown and Red Water is the use of stage directions. Instead of being a silent order that actors follow, they read them out loud to the audience and indicate their actions and feelings. It’s something that is usually done for comedic affect, and it makes character entrances more memorable than usual. Again, it cannot be overstated how important this metaphysical aspect of the play is to conducing emotions from actors to audience.

While the first half of the play is incredible in many respects, it causes expectations for the second half to be unfairly high. The second half deals with Oya’s struggle to find herself and a meaning to her life. We see the repercussions of her past choices and how her outlook on life morphs based on her experiences. It’s a personal journey, but not quite the emotional triumph that is the first half. The first half could have actually been enough to make the play worthwhile. However, this is definitely not to say that the second half is unnecessary, but it does drag out the story somewhat.

All in all, the University of California, Santa Barbara’s production of In the Red and Brown Water is a prime example of how choreography, voice, and acting should mix together in the making of theater. Good performances, in company with amazing choreography and use of physicality, have produced a significant work of modern theater that should be experienced if the opportunity becomes available.