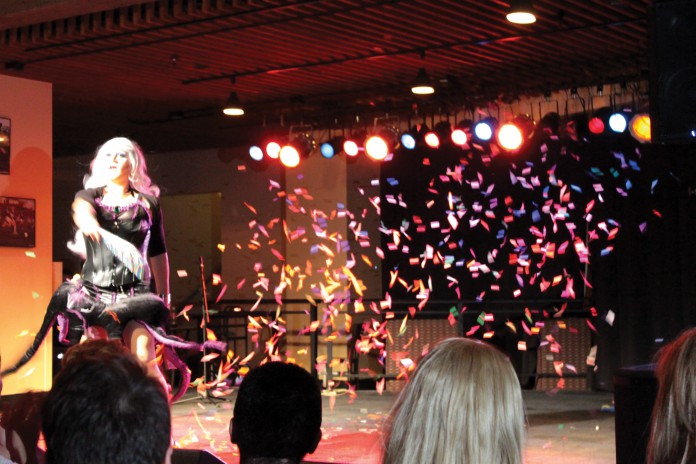 Before the third-annual Winter Wonder Drag even began, the palpable anticipation among the crowd raised a sense of unbelievable eagerness. The two-hour jam-packed event, though incredibly exciting from start to finish, was more than about fierce drag kings and queens—it was about solidifying the supportive and inclusive community Avery Daniels established three years ago.

Daniels is the founder of Winter Wonder Drag. A University of California, Santa Barbara alumnus and psychology major, Daniels coordinated the event with the help of Jenna Scyde, another alumnus with an English major and a specialization in medieval literature.

On Thursday, Jan. 15, Winter Wonder Drag 2015 opened its doors at 8:30 PM in The Hub to more than 300 students who were eager to spectate nine incredibly talented queens and one impeccable king strut.

Daniels and Scyde hosted the event unscripted. They shared their vast energy on stage with performers, including Parker Quin, Tyler Diamond, Frita, Athena, Genesi, Isis, and many more.

Initially, Winter Wonder Drag began as a Queer Student Union fundraiser and morphed into what it is today: a safe space to celebrate pride, community, and queerness. All the arduous effort of reaching out to performers, creating the lineup, organizing the music, and establishing a fully functioning show was apparent.

As Jenna Scyde said, “I have a great love for UCSB’s queer community and would do anything for them. I’m sassy and uncensored onstage, but at the root of it, it is all love.”

Coordinators of the event were able to make this year even more special with their first professional drag queen, the winner of RuPaul’s Drag Race season 3, Raja. With lavishly long legs, Raja strutted the stage to Hi Fashion’s “Amazing” with intense elegance. Afterwards, she hosted a questions and answer portion of the show, where she addressed the thriving drag culture, her inequivalent style, and her relationship with her career.

This event was an inspiration to all, but Raja’s presence amplified it for first-year student Michael Moore. He revealed that his own pivotal journey was in parallel to Raja’s triumph. He said, “Watching [Raja] definitely made me feel more comfortable coming out.”

Glitter, confetti, and powerful renditions of pop idols such as Lady Gaga, Britney Spears, Miley Cyrus, and Regina George dominated the stage that night. Performers knew how to tease and please the audience, and the crowd reciprocated with roaring applauses and never-ending support.

The king and queens radiated on stage, and their ferocity was constantly validated by the loving and highly encouraging community.

“I love that our school does this so much,” said fourth-year Heather Landazvri, an avid drag-show-attendee. “It’s so supportive, so progressive.”

In the midst of thriving individuality and energy manifested from Winter Wonder Drag, one can only embrace the community that is progressively normalizing different gender identities. The atmosphere was undeniably empowering, and each performer possessed their own ineffable attitude.

Shayan Hosseinzadeh, an alumnus and biochemistry major, as well as the winner of the Diva Games, has attended every Winter Wonder Drag. He said, “It’s really inspired me to embrace the drag culture and come out and express myself and feel confident about myself.”

Various forms of ingenuity and creativity were displayed on the stage that night, and it was not uncommon for performers to be showered in dollar bills from audience members.

Winter Wonder Drag, a pinnacle of entertainment, ferocity, and fabulousness, was no doubt entertaining—but on a deeper level, it was awe-inspiring and liberating. Exuding unwavering confidence, this event, for the third year in a row, helped solidify an inclusive stance at this campus.

“Drag is imperative; drag is present; drag it here,” said Raja. “It is part of the dialogue, so let’s celebrate it!”