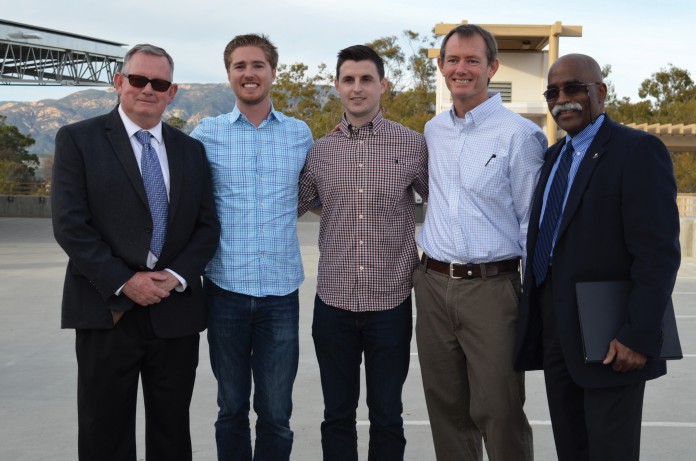 The second student-funded solar array was officially inaugurated on Jan. 22, on top of Parking Lot Structure 22. The project is part of the Renewable Energy Initiative, which a majority of University of California, Santa Barbara students voted to approve in 2010.

According to UCSB Chancellor Henry T. Yang, the REI’s $6 per quarter student fee is expected to raise over $3.5 million in its 10-year lifetime.

“These solar panels are an example of our campus-wide commitment to sustainable, renewable energy, and a reminder that we are to be good stewards of our natural resources,” Yang said.

“Solar energy can happen, it is happening, and UCSB is at the forefront of demonstrating that it can happen here and elsewhere,” Heeger said.

Sustainability Coordinator Andrew Riley says that this 425 kilowatt-hours solar array will completely power the university’s Student Resource Building . He also mentioned that a third student-funded project is being discussed.

“The Recreation Center has a lot of roof space left that we could tap into,” Riley said. “Maybe around the pool, there are a lot of shade structures now so we could actually turn those into solar shade structures.”

The REI was proposed five years ago by former UCSB alumni Michael Hewitt and Clayton Carlson.

“Michael and Clayton embody the true Gaucho spirit of leadership and creativity, and we thank them for spearheading this effort that will pay dividends now and far into the future,” Yang said.

Hewitt, who graduated from UCSB in 2010 with a Bachelor’s degree in environmental studies and is currently attending the University of San Francisco School of Law, thinks that the students deserve the most amount of recognition.

“We came up with the idea of the initiative, but without that student support and belief in not only the environmental side of it but the social and economic side, we couldn’t have made this happen,” Hewitt said. “This [project], I feel like, tips the scale and puts UCSB back on the map, at the forefront of the environmental initiative.”

Executive Director of the Institute for Energy Efficiency David Auston said that this project will help University of California President Janet Napolitano’s Carbon Neutrality Initiative. This initiative was introduced in 2013 by Napolitano and aims to have the UC system reach net zero greenhouse gas emissions by 2025.

“I see this as a first step, a baby step, but a very important one,” Auston said. “It’s wonderful, especially since the students financed it. I actually mentioned [this project] to President Napolitano and she was absolutely, ecstatically thrilled.”

According to Yang, UCSB saved 1 million kilowatt-hours of electricity last year with LED lighting, 90 percent of the campus is irrigated with recycled water, and 40 percent of the produce the university purchases is locally gown. He sees all these accomplishments as important strides in reaching Napolitano’s goal.

“Today marks another success story of which we can all be proud of,” Yang said, “This is a big step not just toward renewable energy, but toward a future of preservation and conservation that will leave our environment intact for generations to come.”