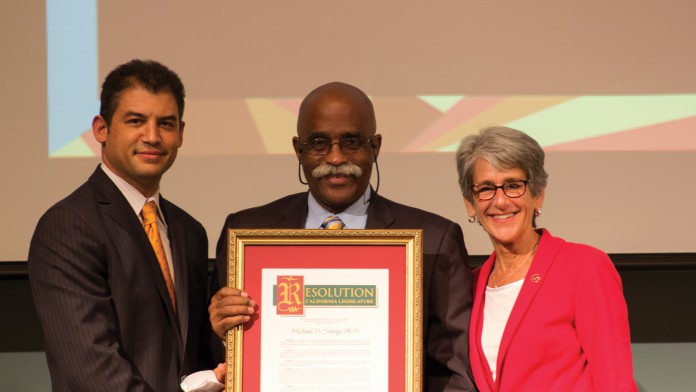 Michael D. Young will officially close his 25-year endeavor as Vice Chancellor of Student Affairs for the University of California, Santa Barbara on Friday, Jan. 30. In honor of his dedication and commitment to the school, the Division of Student Affairs held a retirement reception for Vice Chancellor Young on Friday, Jan. 23, at the Corwin Pavilion.

Guests were met with a grandiose reception of exceptional finger food, fun-filled activities, and jazz music eloquently playing in the background. The back of Corwin Pavilion was dedicated to a photo booth that held various props like a life-sized rubber duck, hats, glasses, and signs. Next to the photo booth was a table that gave guests a chance to write heartfelt memos and notes to Young. Families and friends of Young, faculty, staff, and students socialized as pens and bookmarks were passed out, and a slow jazz tune lingered in the air while a slideshow of Young played from the overhead projector.

Such a lavish opening was only the beginning to an evening full of memories, thank-yous, and laughter. Around an hour into the event, UCSB’s very own male acapella group Brothers from Other Mothers sang a few songs as the main program was about to begin. Afterwards, Senior Associate Dean of Student Life Debbie Fleming welcomed everyone to the reception and introduced special guests and speakers who contributed their own memories and feelings about Young. She opened up by saying, “It’s not surprising that through his 25 years, Michael has also earned the respect and trust of the larger Santa Barbara county.”

In his honor, Congresswoman Lois Capps, Goleta Mayor Paula Perotte, SB County Third District Esther Aguilar, Assemblymember Das Williams, and Senator Hannah-Beth Jackson arrived from all around the county to give speeches about Young. All presented him with either a certificate, plaque, or trophy in honor of his service.

As Jackson humorously pointed out, the huge turnout to Young’s reception was a testimony to the many lives he had touched, for people were willing to attend on a late Friday afternoon.

Former UCSB alumna Britney Foster described Young as a father-figure, mentor, dynamic, and a visionary. She reflected on her 20 year-old self meeting him for the first time and recounted how he made her feel welcome at a college far from home and family, as well as giving her some advice in leadership roles.

In fact, many of the speeches highlighted Young’s dedication to the well-being of all UCSB students and his contribution to multiple programs, as highlighted through the powerpoint slideshow of Young’s achievements and photos, including his work with the Education Opportunity Program, Student Health, Counseling & Psychological Services, and Sexual and Gender Diversity Program.

In regards to the countless years Vice Chancellor Young and Chancellor Henry Yang have worked together, Yang had an endless list of the times they had joined together in keeping UCSB a safe and respectable community.

“Michael, we have been together side by side for a long time,” Yang said to him. He told the story of how Young purchased pizza at 1 AM for a student during a late night meeting, and about the Saturday nights they conversed with students and visited their houses at Del Playa. He also revealed Young’s excellent skill in dancing. Yang said, “I can’t stop reminiscing the time we spent together.”

Yang continued to describe Young as fair and respectable, and he honored Young with a very special title as the Vice Chancellor for Student Affairs Emeritus. Eliciting a roar of laughter across the room, Yang said with exclamation, “Now you will be Vice Chancellor forever!”

Following the plethora of great speeches that Young’s friends, colleagues, and students had prepared, it was finally his turn to address his own thoughts and memories of his quarter of a century at UCSB. He starts off with thanking and acknowledging his wife Joanne Young, saying “I would not be here without you.”

Young reflected on the things that he was proud of, like the organizations he supported and the Student Resource Building. But, in a touching moment, he said, “First and foremost of what I’m proud of is our students.”

“Time and again, over and over again, crisis after crisis, issue after issue, our students, UCSB students, have stepped up,” said Young. Referencing a quote from President Obama, he said, “They are the ones we have been waiting for.”

He closed off this statement and said, “I’m proud to know you, I’m proud to be associated with you, and I have high hopes and expectations for what you are going to achieve.”

Young concluded the evening by thanking a few people as Fleming closed the program. Young was surrounded by applause as everyone rose in honor of him.

As encouraged by Young’s former student and colleague Aaron Jones, Assistant Director of Associated Students, we must not let Young’s 25 years of hard work and dedication go to waste, as we must continue to remember his contributions and aspire to carry on Young’s passion towards excellent scholarship, leadership, and citizenship.

In the words of Young, “But the truth is, none of us succeed on our own. Teams win championships.”