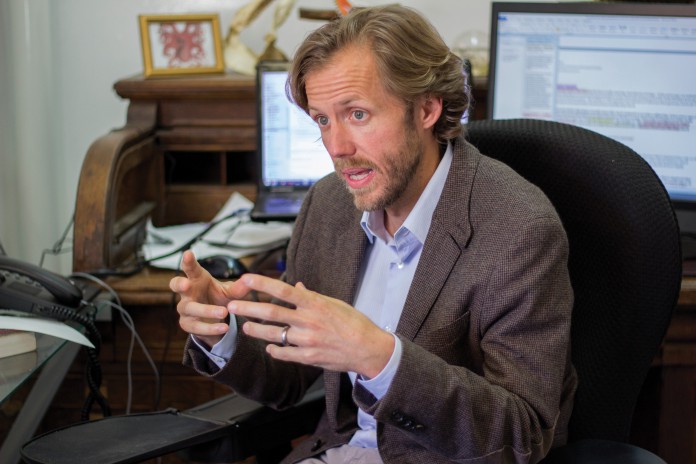 A group of scientists, including University of California, Santa Barbara’s Douglas McCauley and Robert Warner, have found that the same patterns that led to the collapse of wildlife populations on land are now occurring in the sea.

The paper compares the march of the Industrial Revolution on land to current patterns of human use in the world’s oceans. During the 1800s, farmland and factories replaced forests and sucked up resources that were mined from the ground. As a result, many terrestrial species were driven to extinction. In the ocean, a similar phenomenon is happening as more people rely on ships and fishing.

“A lot has changed over the last 200 years,” said McCauley, lead author and professor in UCSB’s Department of Ecology, Evolution, and Marine Biology (EEMB). “There are few extinctions in the ocean compared to those on land, but we have dramatically reduced the population and health of marine wildlife.”

Before 1500, only a few species of seabirds had vanished. Since then, scientists have only documented 15 ocean extinctions, including the Steller’s sea cow and Caribbean monk seal.

Scientists found that there are clear signs that humans are harming the oceans to a remarkable degree. Some ocean species are overharvested, but much of the damage comes from large-scale habitat loss, which is likely to increase as technology advances and humans become more dependent on the ocean.

“On land, we usually hunt, and if we overhunt, we can drive a species to extinction,” said McCauley. “However, in the ocean, we pollute their habitats and hunt the animals. Although we do not drive many of them to extinction, we decrease their population dramatically.”

One of the most serious threats to ocean wildlife is climate change, which is degrading wildlife habitats and has a greater impact on these animals than on terrestrial wildlife.

“Harming the habitats of marine wildlife have great effects on their health,” said McCauley. “It’s as if you are dumping acid into a fish tank, or cranking up the temperature. It not only makes your fish unhappy, but it also hurts their health. In effect, that is what we are doing to our oceans.”

Although damage to marine habitats has been increasing since the Industrial Revolution, there are still ways to turn the problem around.

“The good news is that it is not too late to change,” said McCauley. “Often times, we find the cause to an environmental problem when it is already too late to fix the problem. Although we have dwindled the population size of many species, we are still able to work with the animals we have and take measures to prevent further habitat loss.”

One solution the paper highlighted involves protecting more and larger areas of the ocean from fishing and industrial development.

“One of the things we can do is set up more parks in the ocean,” said McCauley. “There are currently a couple of small parks set up in the ocean, which are small areas that are protected and prohibited from fisherman and charter boats. Many people are not aware of the environmental effects of closing off parts of the ocean and only see it as closing off opportunity for fishing and expanding resources.”

Researchers emphasize that although the ocean’s future is yet to be determined, relative health of the oceans presents an opportunity for saving them.

“We can continue to industrialize and move forward technologically at the price of the ocean, or we can collectively make changes to ensure a better future for our oceans,” McCauley concluded.