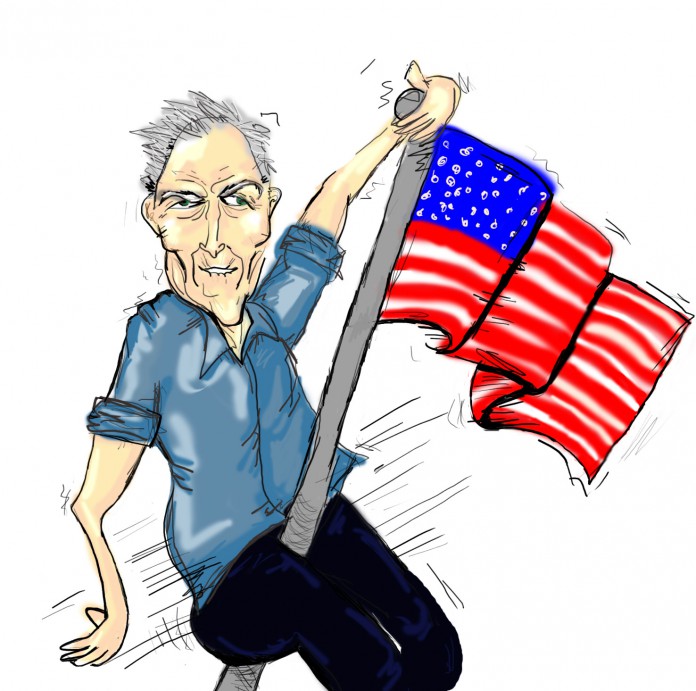 American Sniper opened to a huge $90 million weekend gross and a number of Oscar nominations. However, the film has met a lot of criticism due to director Clint Eastwood’s depiction of the subject matter, allegedly glorifying violence and war. After having watched the film, I can say that it oversimplifies the war in such a way that makes it hard to deny it as anything but a glorification of violence.

The film is a biopic of Navy SEALS sniper Chris Kyle, based on Kyle’s own autobiography. Kyle, played by Bradley Cooper, is known for having the single largest kill count out of U.S. solider, sitting at over 160 confirmed kills according to the film.

We as an audience are expected to sympathize with Kyle; his actions are constantly portrayed as heroic and noble, and he’s the person who punishes the bad guys for doing bad things. He claims to care not about how many people he has killed, but rather how many soldiers he could not save. As a veteran he suffers from Post-Traumatic Stress Disorder (PTSD), and the only thing that helps him to feel better about his own issue is helping other veterans afflicted with PTSD. In other words, he is the textbook “good guy.”

The problem with this depiction of Kyle is how one-dimensional it ultimately becomes. Hints of complexity and moral ambiguity are sprinkled in throughout the film, only to be totally ignored by the end of the movie. Additionally, the ending which paints Kyle in such a drastically positive light seems to come out of nowhere. While his courage and service is undeniably admirable, we are talking about somebody who has killed over 160 people and never once questions his morality.

Such a one-dimensional character results in a one-dimensional view of the war itself. Despite the battles being depicted in a gruesome, gritty manner, nobody questions America’s involvement in Iraq. On the off-chance that a character does, they are either never seen throughout the rest of the film or are later killed, also killing off any potential for discourse.

In conjunction with this, all of the Iraqi characters are portrayed as brutal barbarians. There is never an attempt to humanize them in any way. No context is ever given to their side, nor do any of the American characters really seem to care how they feel. Every Iraqi character is either a terrorist or affiliated with one, and there is always a scope aimed at them.

Violence seems to be innately understood by the film’s logic as the only solution to problems. From the time he was a kid, Kyle is taught that using aggression to protect the ones you love is the most admirable way to live. He views himself as a cowboy and a punisher, using his skills to take out the bad guys and save the good guys.

In this sense, the film advocates the use of war as the best solution to conflict. Kyle’s morals serve as a parallel for America’s involvement in the war, justified due primarily to the fact that it is being used for the benefit of the “good guys.” The film never once stops to question who the good guys really are, wholeheartedly believing it to be the Americans.

Eastwood is notorious for being a right-wing advocate, thus such conservative opinions should not necessarily be unexpected. The rest of the film very clearly upholds conservative beliefs, as “God, country, family” is what Kyle views as most important.

There is nothing inherently wrong these conservative views being so prevalent, especially for an industry that is notoriously liberal. The problem lies with how resistant the film is to introducing any views that oppose Kyle’s staunchly patriotic views. They are few and far between, and when they are brought up, they are glossed over, taking a backseat to Kyle’s pro-war experiences.

The end result is a depiction of a war that is undoubtedly patriotic while also simultaneously being laughably opposed to anything un-patriotic. Despite being a well-made film, it is hard to take seriously as anything more than a story about a soldier’s brutal experiences in a brutal situation.

While American Sniper might not be total propaganda, it certainly seems to advocate the use of war as an ideal means of dealing with world issues.