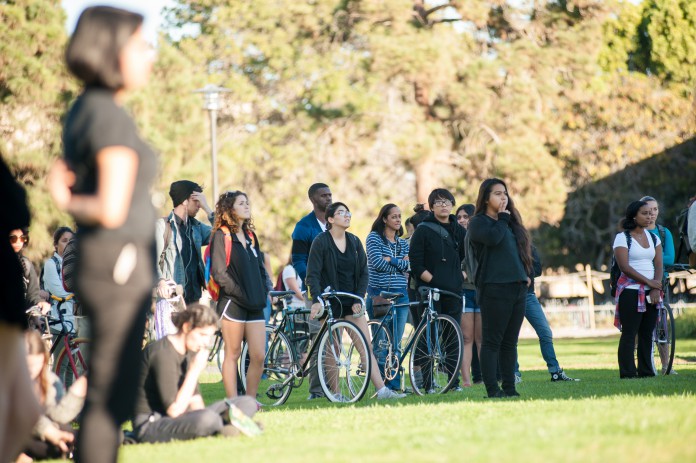 Responding to the grand jury decision to not indict Darren Wilson, students and community members gathered at the University of California, Santa Barbara for a public forum and march on Nov. 25.  The forum began at 2 PM at Storke Tower and acted as a space for people to share their feelings and demonstrate their solidarity.

In Ferguson, Missouri on Aug. 9, Wilson, a white police office, fatally shoot an unarmed black 18 year-old man, Michael Brown. Since the incident, people across the nation have been waiting to see if Darren Wilson would be tried for the death of Michael Brown.

The St. Louis County grand jury’s decision to not indict Wilson was released on Nov. 24. Immediately, the Black Student Union on UCSB’s campus began organizing a full day of protest in response to the decision.

“[We] actually held an emergency meeting with several BSU executive members at midnight on Tuesday… Sue created the facebook event at about 5 AM and from there we were able to share it across the university via orgsync, SA announcements, and the Black Studies Listserv,” said Jamelia Harris, a third-year black studies and sociology double major and the BSU outreach chair, in regards to planning the day of action. “We woke up at about 8 AM and began to chalk the university and search for professors who would be willing to make a statement to the public at our open forum.”

“I was completely in disgust with the outcome of the verdict,” stated Harris at the beginning of the forum.

The event began with opening remarks and participants were soon asked to hold hands and form a large circle. A moment of silence was shared before protestors began shouting out one word each to describe their feelings about the situation in Ferguson.

Professor Jeffrey Stewart, Chair of the Black Studies Department at UCSB, was then handed the microphone to address the crowd.

“Our only hope for any kind of justice is with the federal system,” Stewart said before advocating for economic boycotts as means of effective, non-violent protest. “We’re really on the verge of becoming a police state in this country.”

The event then turned over to an open microphone forum for participants. Many students and several community members used the space to share their emotions. In discussing her constant fear, one student stated, “We’re all criminals. We’re all looked at as these bad people no matter what.”

Her comment held a sentiment shared by many at the event.

Community members were also welcomed to share the space created by the BSU. One woman gave her perspective as a mother: “My son said, ‘I feel like saying something because it’s wrong.’ So, if my eight year old boy knows that it’s wrong, why can’t we all see that?” She added, “And as a mother, I stand with you. And as a mother, I am proud of you.”

After the chants ended, protestors then assembled into a group to march through campus and the streets of Isla Vista.

“The most rewarding part of the entire day was the togetherness, solidarity, and compassion of the community,” Harris said of the event. “People were so eager to join our efforts and thus we would love to begin a coalition for community activism…social change happens when entire communities move in unison.”

“This is an American crisis,” Professor Stewart said. “Human dignity is still a value in this country…at least among us.”