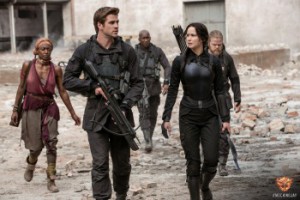 As the familiar four-toned whistle resounded throughout theater 3 of Goleta’s Camino Real Cinemas, excited audience members whispered to each other in anticipation for The Hunger Games: Mockingjay – Part 1. The 8 P.M. “premiere” showing was completely sold out beforehand, and the 9:30 P.M. showing filled up reasonably quickly as well. Clearly, there is a considerable Hunger Games fan presence in the area, as the vast majority of the audience seemed to be college-aged or just slightly younger.

In a move that has been met with more derision than excitement, the final installment of the Hunger Games book series has been split into two movies, with the first of these two penultimate chapters premiering on Nov. 21. This trend of splitting movies has been seen in other popular series such as Harry Potter and Twilight. Whether or not this actually benefits the movie is questionable, but there is no doubt that it brings in considerable profits for the movie producers, and by splitting Mockingjay into two movies, there will be much more hype surrounding the final movie. However, this did not take away from the cinematic experience of this movie, though it was not as action-packed as the second half will surely be.

Mockingjay – Part 1 was more of a set-up for the second half of the installment. There was not a lot of action, but when there was it had everyone on the edge of their seats, and there was a considerable amount of character development. The protagonist, Katniss Everdeen, went through quite a lot at the end of Catching Fire, and this movie illustrates how she deals with those obstacles. Jennifer Lawrence does a fantastic job of portraying Katniss once again. Her ability to portray Katniss’ emotions is remarkable, and the scene at the end—you know which one I mean—had everyone in the theater on edge.

Also very impressive was the transformation Josh Hutcherson went through to correctly portray Peeta Mellark in this movie. He was stick-thin and truly looked sickly, and his highly emotional performance was one that will be remembered alongside Lawrence’s. Liam Hemsworth was also consistent and had very good chemistry with Lawrence throughout her struggles in this movie.

It was nice to see a bit more of Prim Everdeen (Willow Shields), Katniss’s younger sister. There was some character development, as well as some comic relief involving her beloved cat, Buttercup. As mentioned before, the film spent plenty of time fleshing out its characters in preparation of the series’ conclusion, and this was true for many of the less significant characters such as Haymitch, Effie, and Finnick, who become much more significant in this movie and will be of even more importance in the finale. Elizabeth Banks, who plays Effie, did a great job of both appealing to the audience and retaining the “Capitol” essence of her character. Woody Harrelson also did not fail to make the audience both love and hate him as he becomes an even more significant part of Katniss’s life.

Perhaps the most heart-wrenching aspect of the movie was the performance of the late Philip Seymour Hoffman, who plays Plutarch Heavensbee. Though he filmed a good bit of the movie before his tragic death, you could already sense some filmmaking effort put in to working around his absence. What the second installment of the movie will do to work around his part, we do not know, but he will definitely be missed on screen.

Overall, the movie did a good job of translating the book to film, and fans of the novel should not be too upset with this adaption. One of the benefits of splitting a book into two movies is that there is more time to include all of the important things that would otherwise be left out in a shorter version. However, as mentioned before, this movie was mostly a set up for the final one. Nothing too vitally important was left out, from what I can remember, and for those that did not read the book, it was not too confusing to follow. It was an entertaining and enjoyable film to watch, and I would definitely recommend it to anyone while the world eagerly awaits the cinematic conclusion.