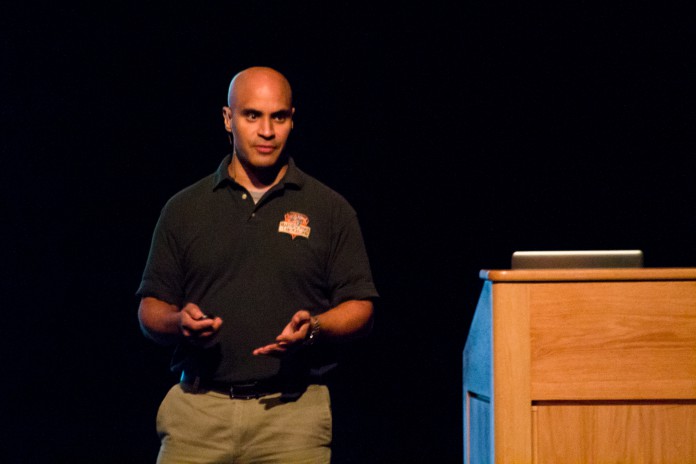 Growing up in an area far enough from bright city lights to look towards the night sky and marvel at the Milky Way, spread out in a seemingly infinite panorama from horizon to horizon, would leave a lasting impression on anyone. For Kobie Boykins, this inspiration, coupled with a deep seated fascination with electrical devices, fueled a passion for space exploration eventually resulting in a job as a leading engineer in NASA’s Jet Propulsion Laboratory (JPL).

Boykins shared his experiences working on the missions responsible for landing the rovers Spirit, Opportunity, and Curiosity on Mars in Campbell Hall on Sunday, Nov. 23 as the second installment of University of California, Santa Barbara’s Arts & Lectures’ “National Geographic Live!” series.

The presentation began with a short video with exciting and captivating shots of natural phenomena and wild animals, reminding the audience why National Geographic has remained a relevant and widely read magazine for almost 130 years. However, from that point on, all the visuals were directed upwards toward space or indoors to a high-tech NASA laboratory.

Boykins described the process each rover went through to land on the red planet, shedding away layers of machinery into the chasm of interstellar space as they outlived their usefulness, with a keen and endearing enthusiasm paired with detailed mechanical information regarding the machines themselves. He joked about how the rovers Spirit and Opportunity were almost named Beavis and Butthead until a young Russian immigrant girl submitted an essay describing how the spirit of America was providing the opportunity to make dreams come true.

As exciting as space travel is, the rovers’ missions while on Mars, and the results obtained from each, were the real attraction. Spirit and Opportunity acted as geologists; both rovers drilled into the soil of Mars, collecting samples in search of hematite, a mineral known to precipitate out of water. Not only did both rovers find significant concentrations of hematite, confirmed to have originated from water in Mars’ Meridiani Planum plain after further analysis, but also varying concentrations of salt by elevation. The salt found on the red planet was more concentrated in soil lower in elevation and less concentrated in soil higher in elevation, suggesting the surface of Mars was once covered by a salt water sea similar to Earth’s until it slowly receded and Mars became the dry, rusty landscape it is today.

On the other hand, Curiosity is acting as a biologist. Its assignment is to seek out any remnants or current expressions of life. In an awesome turn of events, Curiosity’s first drilling found an environment that could support microbial life.

Now that we know water once existed on Mars and have obtained more evidence of extraterrestrial life on the red planet, space researchers have generated new questions requiring an entirely new set of answers. Boykins particularly wants to know why water disappeared off of Mars’ surface and if that could happen to Earth’s oceans, focusing on planetary protection as well as biological discovery. The answers NASA finds could fashion a new perspective on how we treat our planet and what our destructive habits could mean for Earth’s future.

At a few points in the presentation, Boykins took a step away from the images of space crafts and dusty Martian fields to wow the audience with vivid pictures of galaxies throughout the solar system. Boykins showed the audience the pictures, “not because they’re beautiful, but because they make us think of different things.” Usually, the sentiment says human beings are insignificant compared to the vastness of the stars, but doesn’t that just mean there’s more ground to cover, more space to explore? Kobie Boykins certainly thinks so.

If you didn’t make it to this breathtaking event, UCSB’s Arts & Lectures is hosting two more National Geographic Live events this school year: “Spirit of the Wild” with Paul Nicklen on Jan. 11 and “Extreme Planet” with Carsten Peter on March 1.