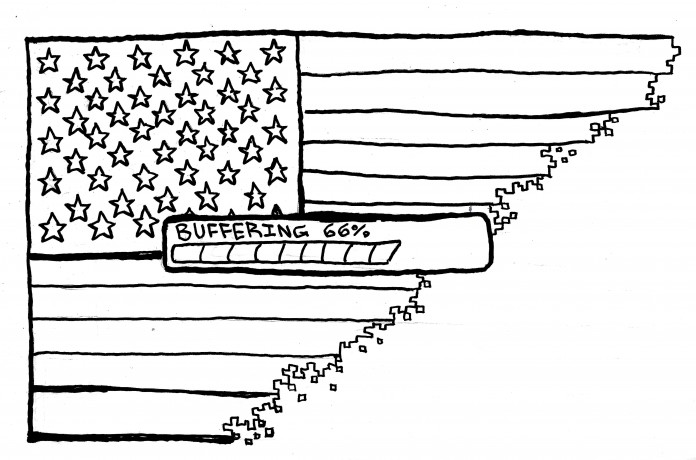 The U.S. lags behind most of the world when it comes to internet speed and affordability. However, other cities such as Seoul provide their citizens with the fastest internet speed in the world.

It takes 1.4 minutes to stream a high-definition movie in the U.S., while in Seoul it would take seven seconds; Seoul boasts incredible connections of 1000 megabits per second for $30 a month. In comparison, the U.S. averages 9.8 megabits per second speed for $300 a month.

Hong Kong, Tokyo, Bucharest, and Paris are comparable–they provide relatively the same high internet speeds at around the same low price. Meanwhile, the U.S. considers 25 megabits per second to be high-speed and continues to uphold its high prices.

The reason the U.S. lags behind these cities isn’t because of a technological gap; it’s a result of an economic problem. There’s a lack of competition in the broadband industry.

“It’s just very simple economics,” said Tim Wu, professor at Columbia Law School. “The average market has one or two serious Internet providers, and they set their prices at monopoly or duopoly pricing.”

This explains why online videos, such as YouTube, have to buffer.

“You may think it’s the YouTube application… [or] something wrong with your computer,” said Susan Crawford, professor at the Benjamin N. Cardozo School of Law. “It’s probably the network provider making life unpleasant for YouTube because YouTube has refused to pay in order to cross its wires to reach you. And we’ll be seeing much more of that kind of activity in the future.”

It was originally thought that two or three major internet providers would compete against each other to provide low prices for American consumers.

“The Federal Communications Commission (FCC) in the early 2000s really thought that competition would do the job of regulatory oversight — that that would protect Americans,” Susan Crawford says. “As it turns out, they were wrong and we’ve come into an era where these markets have consolidated and for most Americans, their only choice for high-speed, high-capacity Internet connection is their local cable monopoly.”

75 percent of Americans have only one internet provide option in their area, usually Comcast, Time Warner, AT&T, or Verizon.

“Stop and let that sink in: Three-quarters of American homes have no competitive choice for the essential infrastructure for 21st century economics and democracy,” Tom Wheeler, chairman of the FCC said.

Countries in Europe encourage competition among broadband companies by requiring these companies to lease space in the wires carrying broadband to people’s homes to rival companies.

“The big internet providers [in the U.S.] have little reason to upgrade their entire networks to fiber because there has so far been little pressure from competitors or regulators to do so,” said Crawford.

The implications of this internet downfall are tremendous in the scope of global competition. “Unless somebody in the system has industrial policy in mind, a long-term picture of where the United States needs to be and has the political power to act on it, we’ll be a Third World country when it comes to communications,” Crawford warns.