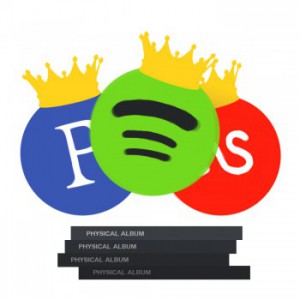 It is a rarity when a bestselling album can simultaneously mark a major annual landmark for the music industry yet  dig another foot into its grave. Taylor Swift managed to achieve this feat with the spectacular sales of her new album 1989, released Oct. 27, selling an impressive figure of 1.287 million albums in her first week, the first platinum album of 2014. Despite the success of this album, why has it taken until November for an artist to sell a platinum album in an industry where CDs alone used to account for $15 billion in revenue?
The depressed album sales of 2014 are a continuation of the precipitous decline in album ownership beginning in the early 2000s, when the public changed the culture of music listening and ownership forever by logging onto their computers. This transition began in 2001 when peer-to-peer (P2P) programs like Napster began gaining popularity. Suddenly, instead of having to drive to a record store and pay money for music, you could simply log onto Napster and receive the songs from someone who had already bought them. Napster marked a turning point in the way music was distributed, showing listeners a method for acquiring copious amounts of music without spending copious amounts of money. By 2003, the iTunes store became a legal online marketplace, so anyone could buy music on the internet without using controversial P2P software. Even though consumers were now legally paying for music online instead of exclusively downloading through P2P, iTunes gave people the option to buy individual songs off an album without purchasing the entire product.

But why is 2014 such a lackluster year, even compared to such a dismal decade? Even more puzzling, why have iTunes sales dropped 13% from last year? Some point the finger at online music piracy, but multiple studies have shown piracy has a positive effect on music sales, at least in recent years. A more plausible answer is the rise of online music streaming services, spearheaded by Spotify. According to Nielsen SoundScan, music streaming activity in 2013 increased by 32 percent while music sales decreased by 6.3 percent. Billboard also reports that Spotify boasts “40 million monthly active users including the 10 million paying [subscriptions] – one in four.” The 30 million who use the software for free have unlimited access to thousands of artists’ entire catalogs from the comfort of their laptop.

Additionally, BBC reports that artists earn $0.007 per stream, a mere fraction of a cent. Some artists, like Taylor Swift and Thom Yorke, have chosen to take their music off Spotify in protest of these low wages. However, both of these artists already have well-established and loyal fan bases. Can new artists risk losing Spotify as a platform for promotion? Will their earnings fall even further?

Moreover, as more people pick and choose which individual songs they want to listen to off of a streaming service like Spotify, or want to download from iTunes, fewer people listen to full albums than ever before. Now, sales of individual songs totally overshadow album sales. According to CNN Money, 1.4 billion digital singles were sold in the United States in 2012 “dwarfing CD sales by a factor of seven.” And with this changing mindset, fewer people than ever appreciate the album as an art form.

When was the last time you listened to an entire album all the way through without pausing; not as background noise, but paying attention to it as if it were a movie? Listening to full albums as a pleasurable activity is lost on our generation, to the point of sounding silly, and in a culture where most only buy certain songs off an album and ignore the rest, it’s no wonder. The point of an album is to explore, ideally, to lose yourself, within an artist’s sounds. If more people realize the value in owning an album, the experience of listening to it in full, and the quality of sound of physical CDs and vinyls then album sales will increase again. Until that day, the music industry’s grave grows deeper and deeper.