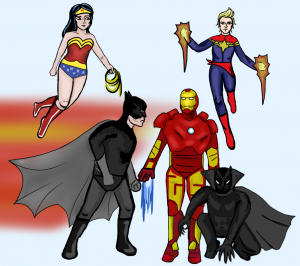 The universe of superhero movies is always slowly expanding, but this past month, comic book titans DC and Marvel created big bangs, preparing to launch fans across the globe, the galaxy, and infinity itself.

In early October, after they kept fairly quiet at San Diego Comic Con, Warner Brothers (responsible for DC’s films) finally gave a layout of their future through the year 2020, securing their spot in the race currently dominated by Marvel Studios. Newly announced films are set to feature such comic book staples such as Wonder Woman, the Flash, and Aquaman, who will join Batman and Superman for two Justice League films. Additionally, lesser-known characters Cyborg, Shazam, and the antihero Suicide Squad, will make their silver screen debut. With such merits as a female-led superhero film (Gal Godot as Wonder Woman), the first openly queer actor playing a superhero (Ezra Miller as the Flash), and the first superhero-of-color (Ray Fisher as Cyborg), DC Studios played a bold hand for fans wondering if they would make strides to keep up with Marvel’s Cinematic Universe, already in the second of several “phases.”

Eyes and ears turned to Marvel for their response. They too laid low at Comic Con, only confirming a sequel to Guardians of the Galaxy, a film which at that time had yet to be released. But on Tuesday, Oct. 28, two weeks after DC’s announcements, Marvel held a “secret” event in Los Angeles during which they previewed footage of this May’s upcoming Avengers sequel and released the titles and dates of their next nine projects, capping their release calendar at eleven films through 2019. Since Marvel’s heaviest hitters had their starts in earlier phases, this announcement brought a deluge of new names–Captain Marvel, Dr. Strange, Black Panther, and the half-alien Inhumans–as well as the next installments of their ongoing Avengers franchise. They too will present their first female-led film (Elektra doesn’t count), as well as a hero-of-color, diversifying their fairly white male standard.

So why do these diversified announcements seem contrived? Maybe this is because of neither studios’ prior willingness to step up to making films led by actors and characters other than their supposed staples. For ages, female characters have been denied their own films. Now, in the heat of competition, both studios try to outdo the other, seeing who can make their list as diverse and exciting as possible in order to keep people remotely interested. It has been over six years since comic book movies started gaining traction in cinemas thanks to Iron Man beginning Marvel’s legacy, and it will be another three years before we see the female Wonder Woman or Captain Marvel, and another four before we see the racially diverse Black Panther or Cyborg from either company. Fans have been rallying for more diversity in comic movies for many years now, and there are finally plans to deliver. But is it enough?

Since the critical success of The Avengers, Marvel has had the muscle and fan base to put out any heroes they want, such as the little-known Guardians, and turn each movie into a hit. Instead, they have chosen Ant-Man, who raises more confusion than excitement, and have continued the franchises that gave them such acclaim without introducing other popular characters into the fold. Warner Brothers and DC, knowing they were not pulling numbers as strong at the box office, had to make waves in order for a chance to compete.

There is doubt as to whether they are actually listening to fans. If they did, Wonder Woman, Black Widow, Captain Marvel, and SuperGirl would have all flown or swung onto movie screens already, as would other heroes who garner more buzz than ones like Ant-Man. But, as exciting as all this news is, the mundane reality is that we have to wait a long time before we are going to see them come to fruition. It’s hard to speculate what will happen, but if these decisions are not made to placate the fans as much as for corporate one-upmanship, hopefully the companies will continue to put out some impressive films.