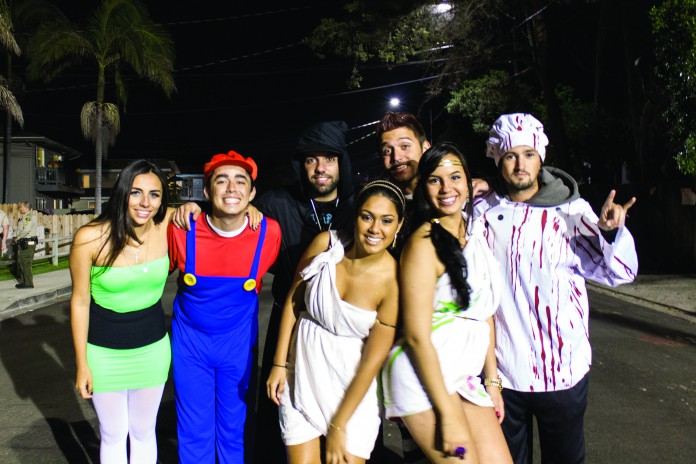 Isla Vista Halloween 2014 was a change of pace from the tumultuous party holidays that have made the event infamous.

According to a Santa Barbara County Sheriff’s Department press release, fewer than 40 citations were issued, and less than 40 people were booked into jail. During the 2013 Halloween celebrations, about 200 citations were issued and 250 people were booked into jail. While the official numbers of attendees have yet to be released, it is estimated that fewer than half the number of non-residents travelled to Isla Vista for the weekend’s festivities than did last year.

Non-residents, or “out-of-towners” as they are collectively known by residents of Isla Vista, account for most of the arrests and outlandish behavior. According to an advertisement placed by Senior Associate Dean of Students Debbie Fleming in the Mustang News, the California Polytechnic State University, San Luis Obispo student paper, non-residents on average comprised 90% of arrests on previous Halloween weekends.

The Halloween crowds thinned out this year, coinciding with efforts by locals to limit the scope of the celebrations. These included a far-reaching “Keep IV Safe” campaign encompassing 120 campuses, an increased law enforcement presence calling in officers from precincts all over southern California, and an on-campus concert by indie rock band Young the Giant. In addition, Isla Vista experienced a heavy downpour of rain. Del Playa Drive looked very different from prior years; the throngs of people that flock to the street every weekend were reduced to bands of partiers huddling under balconies to escape the downpour. Even after the rain stopped near to midnight, partiers were few and far between.

The lack of activity this Halloween was an anomaly in Isla Vista’s history. According to accounts in campus newspapers, large Halloween celebrations started taking place in Isla Vista in late 1970s, but they did not begin attracting big crowds of non-residents until the early 1980s. Since then, the festivities have attracted around 20,000-40,000 people every year.

Second-year computer science major Will Hawkins chose to stay in during the holiday weekend.

“My preference is not to have these big events,” said Hawkins. “I would prefer to have a normal weekend, personally.”

Aside from the rain and relative calm, another factor that distinguished this weekend from others in IV was the strong police presence, even for Halloween. The entrance to Trigo Road, where the IV Foot Patrol Station in located, was blockaded from traffic by police officers. The sidewalks were lined with about 20-30 ambulances and rows of police cars, while the asphalt past the sidewalk was covered by medical tents. In the station’s gated courtyard there was a large crowd of police, between 100 to 200 officers and affiliated personnel.  Past the police station was an armored SWAT vehicle belonging to the Santa Barbara County Sheriff’s Department and adjacent to it was a group of police horses.

For further security, many apartments were temporarily fenced off. Additionally, all of the the residence halls were equipped with a checkpoint where students needed to show their access cards to enter.

Security was undoubtedly tight, but for some, the measures the university and law enforcement took seemed extreme.

“Obviously some restrictions are necessary, but some of them, like locking out certain residence halls, are a little over the top,” fourth-year global studies major Chris Smith said.

In reference to the police restrictions, Hawkins said that some of the police activity was unwarranted.

“I think it’s a little excessive,” said Hawkins. “I think the horses, the cavalry, are completely unnecessary.”

Other affiliated restrictions included 6 PM-7 AM loud music curfews and required, student and staff only, parking passes for campus parking structures over the weekend.