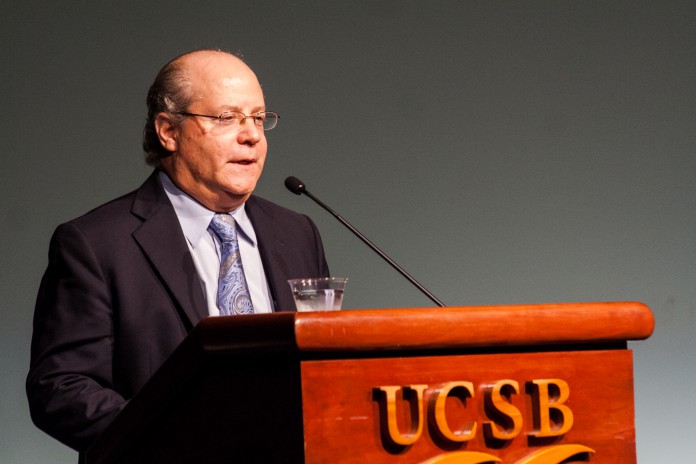 Corwin Pavilion was packed last Wednesday evening, Oct. 29, due to an appearance by former NPR and ABC News correspondent Kati Marton. At the event, put on by University of California, Santa Barbara’s Interdisciplinary Humanities Center, she spoke of her inspiring book “The Great Escape: Nine Jews Who Fled Hitler and Changed the World.”

Marton was born in Hungary to two prominent Hungarian journalists. Her grandparents were killed in Auschwitz, but her parents were survivors of the Holocaust. Later, her parents were put in Soviet prison under false charges of spying for the U.S., leaving her and her sister in the care of strangers when they were very young. Her family fled to the U.S., where they settled in Maryland. Without speaking English, Marton left her home country at a young age and has managed to have a very meaningful life.

In her adult life, Marton has written eight bestselling novels. UCSB religious studies professor Richard Hecht, who moderated the event, said, “She can tell a story and make you feel like you are there with her and her subjects.”

Marton has also been a reporter for a long list of impressive media outlets, including ABC News, Public Broadcasting Service, National Public Radio, The New Yorker, Atlantic Monthly, The Times of London, The Washington Post, The Wall Street Journal, Newsweek, Vanity Fair, and The New Republic.

When Marton is not busy being a bestselling author or an award-winning journalist, she is an international human rights advocate. Marton has worked with the International Women’s Health Coalition, Office of the Special Representative for Children and Armed Conflict at the United Nations, Human Rights Watch, the Committee to Protect Journalists, the International Rescue Committee, the New America Foundation, the Council on Foreign Relations, P.E.N. International, the Authors Guild, and is on the board for Central European University.

Marton came to UCSB through the Herman P. and Sophia Taubman Foundation Endowed Symposia in Jewish Studies to discuss her book, “The Great Escape.” Marton said to the crowd at Corwin Pavilion, “The story that I’m about to tell you is absolutely familiar to me. The lives of the men that I portray in ‘The Great Escape,’ nine extraordinary men from my home town of Budapest who in no exaggeration I can say changed our world, changed America.”

Marton’s book is allows us a glimpse into the lives of nine men who were born in Budapest, Hungary around 1900, a time when the city was one of the fastest growing cities in the world. This rapid growth called for human capitol, and it was one of the first times in history where Jews were able to reach their high ambitions. This generation was well aware of the rare opportunity they were receiving and took full advantage of it. She counted 14 Nobel laureates produced in Hungary, as well as several of the most influential musicians and conductors of the 20th century.

“Like the nine men I portray, I am very aware I wasn’t born into this society,” said Marton. She says a “darkness fell” over Europe in 1920 when Hungary passed the first anti-Semitic legislation. Following the legislation, each of the nine men made their way away from the grasp of Hitler and on to America.

The grand men Marton speaks of include Leo Szilard, Edward Teller, and Eugene Wigner, scientists who enlisted the help of Albert Einstein to alert Roosevelt of Germany’s attempts to build the atomic bomb and became involved with the Manhattan Project. John von Neuman was also very involved in the Manhattan Project, and is well known for his work in developing computers. She spoke of Arthur Koestler, a prominent author who wrote the book “Darkness at Noon,” which Marton describes as “tearing the face off socialism.” She mentioned Robert Capa, the first photographer ashore on D-Day, and Andre Kertesz, who were crucial in the development of photojournalism. She spoke about Alexander Korda, who made wartime propaganda for Churchill, and lastly, Michael Curtiz who made classic films such as “Casablanca.”

Just as communism had uprooted her family, fascism had uprooted the men she has chosen to commemorate in her book. “The story of these men was really in my bloodstream,” she said. Marton was able to relate to their feeling of loneliness that can only result from exile from one’s home country. This trauma was what helped motivate these men to do great things, according to Marton. Although they may have never been truly happy, Marton says, “the gifts that they left us and the lives that they lived were absolutely breathtaking.”

Marton has lived such an involved life because she believes, “We are more or less duty bound to take part in the big issues of the day.” According to Marton, Hungary needs help accepting their history, and her book serves as a window into its past. She said, “History is who we are, and we owe it to the next generation to teach them history.”