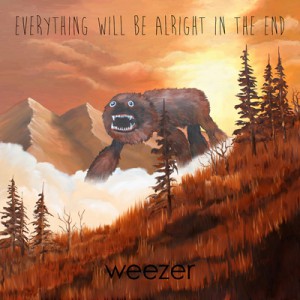 As their first single off their latest album suggests, Weezer has gone “back to the shack” with their latest album “Everything Will Be Alright In the End.” After a long hiatus, lead singer Rivers Cuomo brings back old vibes and classic sounds in this new release. This album seems like an attempt to bring back their old fans after their string of more experimental albums, including “Hurley” and “Raditude.” These boys have been on a winding journey throughout their musical career, and this new album seems to capture their feelings of return, and reminds fans of more classic Weezer with songs that will make you swear you’re back in the mid-nineties. “Everything Will Be Alright In the End” functions almost like a rebuttal to all media and challenges they have faced, as well as an apology to the fans they may have lost in recent years.
“Aint Got Nobody” starts off the album with a bang; if you close your eyes you can almost feel the 1994 “Blue Album” in your hand. The upbeat rock feel brings back memories, and gets listeners ready to hear the rest of the album. In this song, Cuomo mentions his father (and many others on this rest of the album), insinuating that he has made amends, and that past-doubters are perhaps one of the main inspirations of this latest work.

After all the heat Weezer has gotten for their recent stylistic turn, we can understand why Cuomo has soured on the music industry. Many fans, and much of the media in general, have given up on the band because few wanted this change in style. In fact, in a turning point track on this latest album, “I’ve Had It Up to Here,” Cuomo goes on a minor rant, and shows that he always made the music he wanted to make, and didn’t need any approval from the critics.

Another main inspiration must have been the loyal Weezer fans. In fact, the whole album gives off the vibe that the band did this for the fans, and only seeking the happiness of the old fans. We can get a sense of this in the song “Back to the Shack.” If you have been listening to any alternative radio over the past few weeks, I’m sure this song has been stuck in your head at some point. The tune is chill, and the lyrics are quite catchy. But, it is more than a catchy guitar-pop song. In it, Cuomo makes amends with his old fans for changing the classic Weezer sound over the years, and he essentially admits to trying to reach a different audience, and accepts not having done so. However, he obviously knows where he went wrong, and how to make it better because this song is a hit.

As always, Weezer is able to merge real rock instrumental sounds with memorable lyrics that remind us of remorse, struggles, amends, apology, and the journey that the band went through. And the instrumental accompaniment reaffirms this, as the drums, bass, and guitar arrangement is quintessential Weezer.

Weezer has taken their fans on an up-and-down journey through their diverse and ever-changing musical style, but in this album, Cuomo shows that he realizes his past mistakes, and is able to rectify some of them with this latest release. However, he also notes that despite the differing directions the band has taken in recent years, it is not the end of the world, or the end of the Weezer we grew up with. That message is spread through the album, because he wants the fans to recall the past, but also accept what life brings and be true to what you want to do in life, because despite all the struggles one might face, “Everything Will Be Alright In The End.”