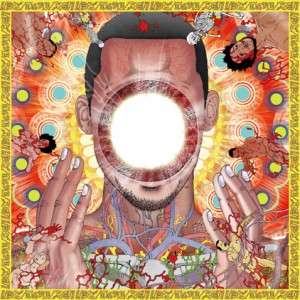 It is difficult to accurately classify the music of renowned Los Angeles producer Steven Ellison, who is more commonly known by his stage name Flying Lotus. His music definitely falls under the broad umbrella of electronic music, but is electronic music still an adequate term? Due to its dizzying amount of subgenres (house, dubstep, trance, ambient, drum’n’bass, trip hop, trap, etc.), the term “electronic music” rivals only indie in modern musical ambiguity. But, no matter what genre you classify it under, Flying Lotus’s newest release “You’re Dead!”, which dropped on Oct. 7, is awesome.
Continuing his foray into jazz-derived electronic music that started with his wonderful 2010 album “Cosmogramma” and continued with his 2012 release “Until the Quiet Comes,” “You’re Dead!” is Flying Lotus continuing the mastery of his own sound. In my opinion, it is his best record yet. The album alternates between bass (brought to you by the virtuosic six-stringed talents of Thundercat), sax-driven fast paced bebop, and slower, smoother keyboard driven jazz all layered with bumping electronic beats.
This is yet another addition to Flying Lotus’ vast array of contributions to the L.A. electronic music scene. He originally gained recognition after regularly playing the Low End Theory show at the Airliner club in Lincoln Heights, a weekly showcasing of local experimental electronic music and hip-hop talent (also a career starting point for Glitch Mob, Nosaj Thing, and many other successful artists). In 2006, FlyLo released his debut album “1983” on local label Plug Research. This garnered the attention of Warp Records, another independent, but more competitive label, putting out music from bands like Grizzly Bear, Mount Kimbie, and Aphex Twin. Through Warp, Flying Lotus has released his past four albums to much critical attention and acclaim. Though he continues to release his records on Warp, he founded his own Brainfeeder Records in 2008, an electronic and hip-hop music label mostly showcasing local LA talent.

In this newest release, Flying Lotus muses on the broadest of existential questions: what happens after we die? This thematic material is given a voice by Kendrick Lamar, who is featured on the track “Never Catch Me.” This highlight is the fifth track on the album, and the culmination of the intense momentum FlyLo gathered during the first four songs. Kendrick first spits about his curiosity with death which later gives way to anxiety that naturally comes to us when we contemplate such things. Soon though, the depression lifts into hope as Kendrick puts aside his fear and realizes he is in control of his own soul. On the next track, “Dead Man’s Tetris,” death is still contemplated, but in a carefree way. Under the alias Captain Murphy, FlyLo raps, “Me and Dilla ‘bout to blow some trees…Don’t need nobody, we bumpin’ on that Astral Plane. Hold up, hold up I think I just forgot my name (that’s cuz your dead),” with “Dilla” referring to the late, influential hip hop producer J Dilla. FlyLo’s raps are followed by a verse from Long Beach gangster rap legend Snoop Dogg, who contributes his signature smooth flow, saying, “Family crying, they think he dead…check his palm, he had no pulse,” perpetuating the idea that your soul stays alive after your earthly existence is finished.

After Snoop’s appearance, Flying Lotus’ existential musings are expressed more abstractly through his electronic beats and jazz instrumentals. On “You’re Dead!”, he focuses more on individual instrumental parts than on experimental beats. When the parts are not virtuosic, they are clever, and when they are not jangly odd time signature interjections, they are calm, melodic, and subtle. However, Flying Lotus does not limit himself to jazz. He makes a foray into gospel with the haunting, spiritually uplifting chorus in “Coronus, The Terminator.” He adds distorted guitar to give songs like “Fkn Dead” and “Turkey Dog Coma” a classic rock feel. Meanwhile FlyLo’s psychedelic keyboards overlay everything as his automated cymbals crash and splash in and out of perception over chords and harmonies he has made his signature.

The album ends on the funky, orchestral song “The Protest,” where guest singer Kimbra chants, “We will live on, forever, forever.” And maybe this is the very point of the album: that FlyLo has created something tangible that he will be remembered for, so that his ideas and persona will transcend his death. Time will tell whether or not this is true, but in the meantime, “You’re Dead!” looks like a pretty damn good attempt.