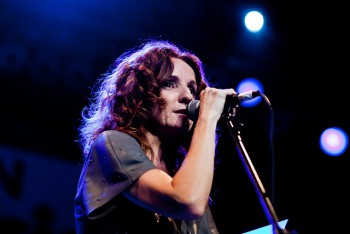 As part of the University of California, Santa Barbara’s Arts & Lectures Series, Grammy-Award winning singer-songwriter Patty Griffin will be coming to UCSB’s very own Campbell Hall on November 2nd, accompanied by singer-songwriter John Fullbright. Griffin is a pioneer of the American folk music industry, and many of her songs have been famously covered by top artists such as the Dixie Chicks, Sweet Harmony Traveling Revue, Robert Plant, and many others. In 2007 she was named Americana Music Association’s artist of the year, and just this past year she released American Kid, her seventh album.
Griffin has always been inspired to sing and write, saying in an interview with Emily Smith, “When I was a teenager I just realized that I needed to sing and I would run home from school and go straight into my closet and sing as loud as I could into the clothes on the hangers.” Creating her music has provided Griffin with an escape since a young age, saying “lots of times before writing songs, the songs that live the longest to me, I have memories of feeling like crap before, and I write a song and something shifts inside of me and I don’t even know why but I just feel better.”

Griffin’s seventh album, American Kid, is no exception to this sentiment that music allows her a sense of release. Her youthful personal style is contrasted with her deep, soulful music, and this emotional depth manifests itself in her latest album. Griffin explains that American Kid was inspired by the gradual process of her father’s passing. Griffin spoke about the album in the aforementioned interview, stating “the songs are written for me to get ready to lose him, and to think about who he was, and to honor him.”

Right down to the art design, her newest album feels very “all-American” and rustic, inviting listeners to travel back to the time when her father was a thriving young man. The rawness within this album is very apparent and Griffin says in her interview, “What’s so wrong about being out of tune as long as your performance is really giving it? And so I was hoping for these performances to do that and to not over think them. We tried to get whole takes as much as we could.” When asked more about her inspiration, Griffin went on to state “we’ve got all of these people around us who have lived these lives and they have all of this information and they get old and they become fairly insignificant.” Her latest album attempts to serve as a representation of all of these lost stories, and as an elegy of sorts for not just her late father, but a generation that is not as revered as they should be.

There is a song for everyone on this album, with songs of romance, joy, and sorrow sharing a common thread of deep love for the material. To name some highlights, “Irish Boy” is an incredibly moving song that Griffin claims was her best attempt at getting in touch with her father’s past. “Wild Old Dog” stands out on the album as a moving commentary about the religious indifference that is growing in America. “Get Ready Marie” is a playful and lighthearted track that breaks up the deeper, more solemn songs on the album, and is based on her grandparent’s dating history. And finally, “Gonna Miss You When You’re Gone” is a beautiful and moving way to wrap up the album. This final song is relatable to nearly everyone, as it exemplifies the feelings of those going through relationship troubles and the loss of a loved one as Griffin was. It is a sweet goodbye to her father and also to her audience as the closing track. Especially admirable is the strength in this song and the fact that even though it deals with a tragic subject, it ends on an uplifting promise that she will one day reunite with her father. This, in a nutshell, is Patty Griffin; she is emotional, spiritual, and entirely dedicated to her craft.

Featuring songs from this album, as well as others that have similar depth, beauty, and ability, Patty Griffin’s appearance at Campbell Hall on Nov. 2 will surely be a night full of amazing music and insight from one of folk music’s greatest performers.