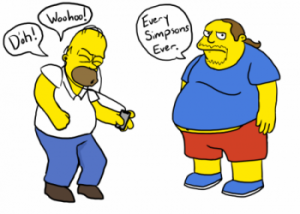 When first signing on to the website, you are prompted to sign into your cable account, as the content is only available for those whose cable subscriptions include the Fox-offshoot, FXX. Despite my parents’ cable subscription that includes said channel, Verizon FiOS was not one of the listed providers. But, I’ve since moved on (I used my roommates’ parents’ account… don’t tell Rupert Murdoch), and once you’ve logged on, you are confronted with a full-screened episode already playing. That’s all well and good, but the real issue is that once there, it is difficult to get to your desired episode destination. The splash page contains more ads for the show, unnecessary and vicariously-Simpsons related content such as Rolling Stone articles on the show, and featured clips that could have easily been found on YouTube, instead of actual ready-to-stream full episodes. Once you realize that the pink donut in the top left corner of your window serves as a pseudo-portkey for the actual content, the website is manageable, but still weighted down with extra features, destinations, and content that is getting in the way of “every Simpsons ever.” I mean, for a show like The Simpsons (with 552 episodes of incredibly wide-ranging quality), to feature a dedicated “Random” button is extremely ill-advised. Fans of the show know what they want, whether that be a specific episode from fifteen years ago, or the one from last night, and I cannot imagine someone logging on to simpsonsworld.com to seek out a “random” episode.

The app, on the other hand, is a different story entirely, and faces the same obstacles as the website with the added feature of poor picture quality, and devastating lag. The process of getting to an episode is the same, but without the control of a mouse, and the extra space that comes with AdBlock. And it is these ads that I believe are the real problems of the app. Like all advertisements on video-playing apps and websites, the ad loads faster, and plays smoother than the content you wish to see. On the Simpsons World app (accessible through the FXNow app), each full-length episode features three long–and loud–commercial breaks that cannot be blocked with a Chrome extension. Multiple times during my viewing, I was bombarded with advertisements that interrupt the middle of a scene, and even ones that play in the background. It is pretty disconcerting to watch Bart and Lisa prep Krusty the Clown for his bar mitzvah while a Jack Links Beef Jerky ad plays over their dialogue and drowns out the touching, torah-fueled reunion of rabbi father and his clown son.

But despite being as initially disappointed as the curator of the Springfield Historical Society was when he found out town-founder Jebidiah Springfield was none other than notorious pirate Hans Sprungfeld, Simpsons World has grown on me. I know enough to no longer attempt to use the app on my phone and tablet, and instead only interact with Simpsons World through its dedicated website.

The cast and crew interviews, and extra features called “Rarities” (for some reason) are fun, and are definitely worth checking out. But, most importantly, the promise of offering “every Simpsons ever” is completely cromulent, as literally every Simpsons episode is available to watch at any time. This means that we no longer have to contend with Projectfreetv being down, and no more praying for the sketchy Russian Smotri player to actually work so we can watch 21 minutes of our favorite TV family. While there are some issues with Simpsons World that will hopefully be resolved soon, ultimately, it is a step up for watching The Simpsons online, even though all of the early episodes are sacrilegiously not shown in their original, 4:3 aspect ratio, and are instead squished and pan-and-scanned to fit the now standard 16:9. However, even a Simpsons purist can deal with that, and all of these other issues, as the advantages outweigh the drawbacks, if only slightly.