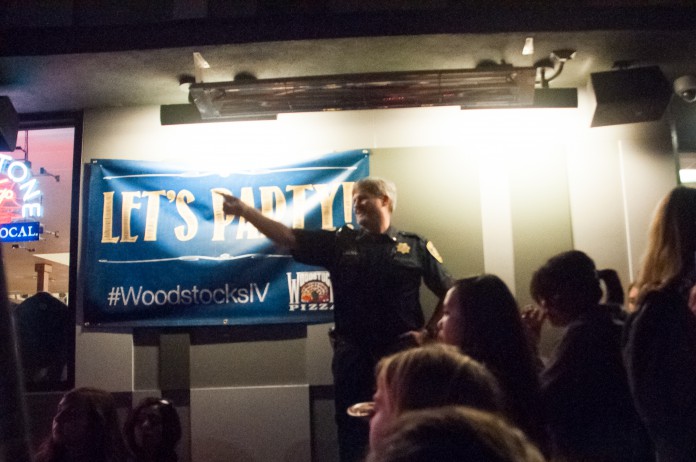 For years, Halloween has been a huge event within the town of Isla Vista that attracted not only its residents, but outsiders as well. With each passing year, the University of California Police Department and the Santa Barbara Sheriff’s Department look for different ways to maintain that which is Halloween in Isla Vista.

This past Thursday, officers from the UCPD gathered at Woodstock’s Pizza to address some of the concerns that students had over the ways in which Halloween was going to be handled this year. Answered by Lt. Mark Signa, the following are some of the questions asked by students at the event:

Q: So there are going to be several barricades that are going to be put into place. How many are there and where are they going to be? What kind of information am I going to need to get into Isla Vista during Halloween weekend?
A: You don’t need special identification to get through the barricades. The barricades are there to prevent vehicles from entering into Del Playa. The areas blocked off are going to be the 6700 block, the 6600 block, and the 6500 block of Del Playa and Sabado Tarde. Again, that is only to stop vehicles from getting through those areas, so pedestrians can go through all they want.

Q: What if a UCSB student that lives on Del Playa is coming home late at night? If they have a valid student I.D. will they be able to park their car?
A: Isla Vista will not be closed off. There are no blockades in Isla Vista itself. The only areas blocked off will be Sabado Tarde and Del Playa. If you live there, you won’t be able to get past those barricades until about 2 o’clock, and that’s only vehicle barricades. If you need to park, you’ll have to get a weekend permit through the school.

Q: In the event of a riot, what type of technology will you be using to control the situation?
A: We will basically be using the things you see everyday. We will not be using drones. If you see drones, they’re not ours. They’ll have barricades for a riot control situation, but outside of that, it’s just standard.

Q: In the riot setting, will you be using tear gas?
A: It’s always a possibility. It can’t be just wanted, there has to be a good cause. The only time it can be used is if the situation on the ground is out of control and they need something to control the situation. It has to get approved through the chain of command and get back to the commander level. It’s not a street-level decision.

Q: What are you doing to protect emergency responders, such as firefighters and EMT’s during the event, in case something happens?
A: When they need to get to somebody that needs help, we will actually have officers with them to get them where they need to go and we’ll stay with them until they get to a safe spot. One of the major concerns we have is to ensure that we can get the first responders and paramedics to where they need to go.

After the event, Lt. Signa sat down and was able to answer some specific questions for TBL:
Q: In terms of Halloween this year, what do you think are the most important changes that people should be aware of?
A: Really the big thing they’ll notice is that the Sheriff’s Department is really going to be focused on the lower streets and the police department will be up on the main streets. Other than that, it’ll pretty much look like every other year. We’re really just trying to increase our numbers and try and make sure that we get the message out earlier than we got it out for Deltopia and other events and try to do more outreach like this.

Q: What other events is the University holding as an alternative to going out to I.V.?
A: This year we’re trying a different tactic. They’re actually looking at creating events, working with Associated Students program board on getting Young the Giant to play at the events center. We’re hoping to get 4,000-5,000 people just to go to that concert and get them out of Isla Vista. It’s a win-win. It gives people a great concert, we get 4,000-5,000 people out of Isla Vista, away from the crowds, and it gives them a safe venue that is protected. It’s a fun thing to do, so I think it’s a win-win for everybody.

Q: What would you like to tell people that are thinking of celebrating Halloween in Isla Vista?
A: Don’t. There’s really, other than walking up and down the street, nothing else to do. And it gets a reputation that it’s a wild, crazy time and the reality is that people show up to walk up and down the street and realize that they’re bored out of their minds with all the cops and costumes. It’s so crowded that you can’t even see the cops. Last year was a great Halloween because of the fact that it was mostly locals and very few out-of-towners came in. If we could keep it a local event, I think Halloween could be fantastic.