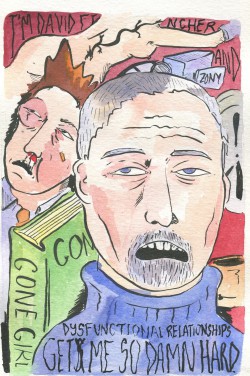 It’s become a familiar sequence of events at the movies: first, we hurriedly enter the theater, feeling a rush of anticipation of seeing one of our favorite books brought to life. Then, as the movie unfolds, the first alteration of a great scene gives us an unpleasant jolt, and the inconsistencies begin to snowball. By the time the credits are rolling, we feel as though the film rushed through our cherished story, muted characters we held dear, and distorted a magnificent work. For fans of a novel being produced for the big screen, it often feels as though film adaptations are doomed to disappoint. But, thankfully, we have David Fincher.

Fincher has been one of the most successful directors of the past two decades, and miraculously possesses the unique ability to keep the spirit of a great story intact, while blending in enough adjustments for the adaptation to shine as an individual film. In 1999, he crafted the modern classic “Fight Club” by taking the ideologies of Chuck Palahniuk’s novel and expanding them to new heights. While the film had its fair share of changes, the differences didn’t serve to alienate the characters but rather enhance them, smoothly transitioning Palahniuk’s writing style to the big screen in the process.

The highly-anticipated 2011 film “The Girl with the Dragon Tattoo” was a more challenging endeavor, as fans of Stieg Larsson’s novel already had the ultra-faithful Swedish adaptation with which they could draw comparisons. Fincher stepped up to the challenge, but refrained from blindly following either of the two previous incarnations of the story. Instead he went with his own gut, adding a fresh and unsettling tone to the story, one that has become something of a signature in his films. Unlike many that came before him, Fincher consistently finds ways to create films that both book-fans and moviegoers can appreciate. However, with his most recent project, “Gone Girl,” which released in cinemas on Oct. 3, the method seemed easier said than done.

I read “Gone Girl,” the thriller novel by Gillian Flynn on which the film is based, this past summer upon my sister’s recommendation during a family vacation, and am afraid to say that I have no recollection of the sight-seeing during the subsequent two days of the trip. This is, no doubt, a consequence of the story pulling me in so tightly that the front and back covers of the book still bear lasting fingerprints. The story in question tells of Nick Dunne, a man whose wife, Amy, disappears without warning. As the search for Amy ramps up, so does the suspicion felt by both the other characters and the reader that Nick is, in fact, the perpetrator.

As Flynn tugged me deeper and deeper into her twisted world of scheming, manipulation, and marriage, I found the novel that much more engrossing. But upon learning that a film based on the novel was in the works, I was puzzled. It seemed that the story, which frequently relies on the unreliability of the narrator and psychological drama, wouldn’t lend itself well to the screen. Even after learning that Fincher was at the helm of this project, I prepared myself for the inevitable letdown.

As it turns out, the film manages to echo the novel’s narrative ability, likely due to the original author Flynn writing the screenplay. Her collaboration with Fincher results in a suspenseful thriller that grasps the heavy character development of the novel while still putting up enough excitement to keep the audience on its heels. From Ben Affleck, who plays Nick, Fincher manages to pull an honest, understated performance, leveraging Affleck’s oft-criticized stiffness to highlight Nick’s perpetual discomfort. And, as always, he adds a layer of stunning atmosphere that could make even the most seasoned veterans of unsettlement shift in their seats. Therein lies the genius of Fincher’s direction: his ability to push boundaries makes him near unparalleled amongst today’s directors.

Film studios will likely never stop dabbling in literature for inspiration, and many beloved novels will thus be butchered for generations to come. But should a book you enjoyed ever fall on the doorstep of one David Fincher, I’d advise against dreading the end result. Simply hang on, and enjoy the ride.