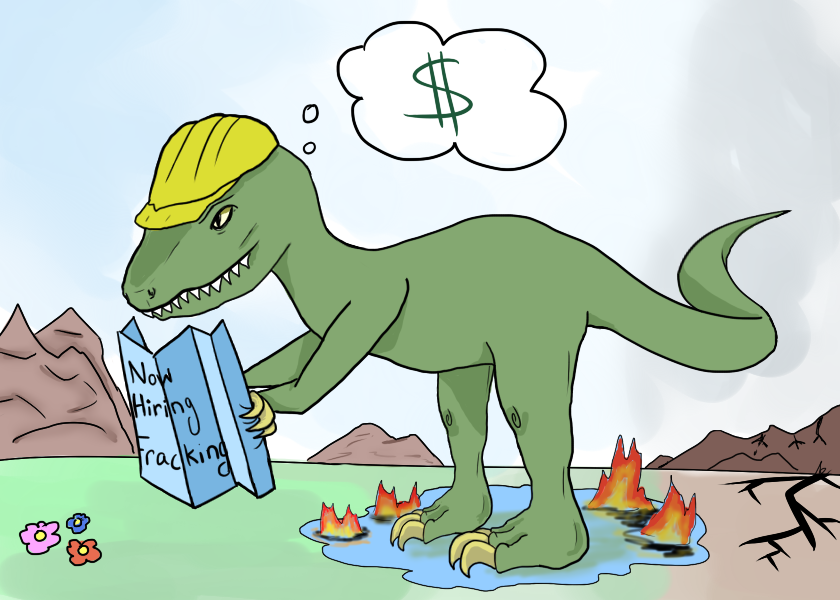 You walk outside with a mask concealing your nose and mouth. If you had walked out without one, you would have been coughing your lungs up like there was no tomorrow. The sky, instead of the nice blue with thin, white patchy clouds, is a dark grey, the kind of grey that happens as a result of a fire. The ocean, even though it hasn’t been clear in a long time, is even less clear now, taking on a much greener hue that is impossible to see through. People as well as pets are unhealthier, unhappier, and it is seen in their demeanor. This isn’t some far-off place like Thailand; it is much closer to home. This is University of California, Santa Barbara.

At this point, you might have the automatic reaction to call me crazy, but that image is what could potentially happen if hydraulic fracturing, or fracking, is allowed in Santa Barbara County. Measure P, which is on the Nov. 4 election ballot, goes a long way to ban onshore oil and natural gas extraction methods such as fracking—methods that hurt the environment. According to Earthworks, the process of fracking involves drilling into rocks to a desired extent before injecting it with fluid, which causes fractures and eventually yields oil and gas. That wouldn’t be a problem, but there are two issues: fracking uses up an astronomical amount of water while we are in a drought, and the fluid they inject into the rocks contains chemicals that are detrimental to the environment. Additionally, fracking has been known to change the landscape in ways that cause earthquakes.

You might ask yourself then, knowing this, who would be financing the fight against Measure P? The answer is pretty simple: The ‘No on Measure P’ campaign, according to Ballotpedia, is directly funded by the oil companies through the statewide political committee, Californians for Energy Independence – and its $1.8 million strong. In contrast, the ‘Yes on Measure P’ side, which draws much of its funding from the Santa Barbara Water Guardians, has less than 10 percent of that, with around $100,000.

One of the strongest and most used arguments of the “No on Measure P” campaign is that banning fracking would make us dependent on foreign oil, particularly from the Middle East. While that is essentially a good argument, we actually aren’t dependent on foreign oil and are far from being dependent on it. According to NPR, most of the oil we use is North American, accounting for well over 60 percent, and the oil we do get from Middle Eastern countries, while minimal, bolsters their economies.

An argument in favor of Measure P is simply that we do not want to look hypocritical, not only as Santa Barbara County, but as the United States. The United States has been pushing for greener technology and that especially includes in the oil industry. We have been phasing out oil as fuel with more people walking, more bikes on the road, more hybrid and electric cars on the road, and greater efficiency for cars that do run on gas. We are far behind other western countries in the realm of helping the environment, and if we are to be taken seriously, the last thing we want to do is say one thing and do the exact opposite. Doing things is a lot harder than saying things, but if we don’t do something to get to where we want—a cleaner earth—the consequences will be dire.

You walk outside without a mask covering your nose and mouth. You’re not coughing your lungs out like there is no tomorrow and the air just feels cleaner. The sky is back to its light blue color with a few scattered clouds — not like the air in the aftermath of a fire. The water is as clear as you remember it. People, dogs, cats — they’re happier and they definitely look healthier. Measure P passed, it was all a dream, and you can, literally, breathe easier now.