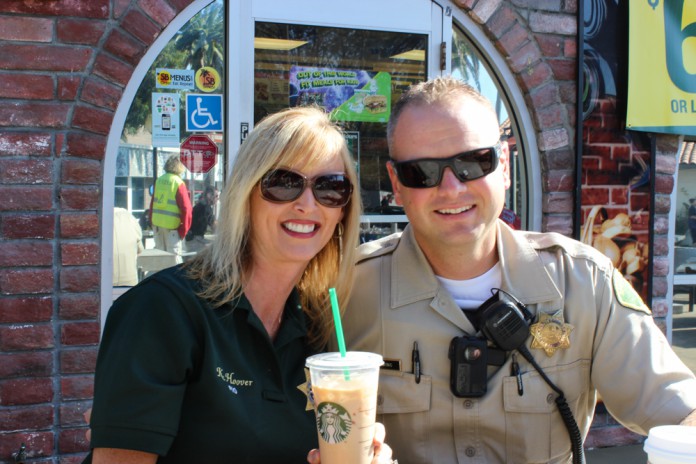 The Santa Barbara County’s Sheriff Department held a back to school event, Coffee with a Cop, at the Starbucks on Embarcadero Del Norte on Wednesday, Oct. 8. The aromatic coffee shop was crowded with students, community members, and about two dozen law officers.

Going into Starbucks I was greeted with firm handshakes and smiles. With a limited time of two hours, I wished I could have interviewed every deputy, officer, and sergeant, but with the time I had, I was lucky to be able to meet Public Information Officer Kelly Hoover and Officer Neil Gowing.

On the basis of helping others, Hoover and Gowing love their jobs, and their common goal is to ensure the safety and well-being of our community. However, being an officer is not an easy job. Often times, police officers are despised for giving out speeding tickets and shutting down parties. We tend to forget that police officers do these things so that at the end of the day, we can all go home and sleep in our beds safe and sound.

When I asked Gowing what motivated him to continue his duties as a police officer despite all of the negativity, he said, “Not everything is negative.” To Gowing, a few of the people he talks to while patrolling IV he considers friends. He said he believes that the people he regularly sees and catches up with are relatively “good kids.”

As for Hoover’s motivation in her role as a PIO, she displayed a sense of pride in her job and the people she works with. She said, “I adore my job, I’m very proud to speak on behalf of the hard working and dedicated and highly trained knowledgeable sheriffs, deputies, and staff that I work with. They do incredible work, they save lives, and it’s really an honor for me to be a part of their mission.”

Halloween in IV is coming up, and while we roam the streets of IV in our costumes, stay home, or go to a get together with friends, our own officers will be out to enforce a safer environment.

This will be Gowing’s thirteenth year patrolling IV Halloween and Hoover’s second year, and they said they have just about seen it all. Gowing said the best costume he saw was someone impersonating local reporter John Palminteri, and Hoover said her most memorable costume was a guy riding a bike with ET in his basket.

Like almost every IV Halloween, there will be thousands of people  in the streets, and in order to organize a smoother Halloween, Hoover said to help them help us by keeping it local. After all, the most important thing for Hoover is for everyone to have a great time.

Aside from patrolling our community, our officers have lives outside from their jobs. Maybe their uniforms and thick black sunglasses tell us otherwise, but the reality is that police officers are also friends and family members to others, and they risk their lives to ensure our safety.

As the interview came to a close,  Hoover and Gowing ended with a few thoughts to keep in mind.  After a moment of deep contemplation, Hoover expressed her hopes of “having a good school year by working closely with students.” She added, “Let’s kick-off the school year with a positive interaction.”

Gowing said,  “Be safe, be smart, and be aware of surroundings.”