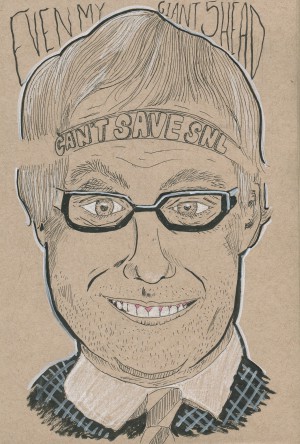 When great things come to fall, as they always inevitably do, it presents us an opportunity to dissect the remains, and wonder about what went wrong. Personally, I’ve always found this vulture-like behavior agitating; not all demises warrant explanation, and some things are just bound to decline after time. But, when a television show like “Saturday Night Live,” which is incredibly in the midst of its 40th season, appears to be at the end of its days, it’s more than enough to grab my attention. While the show continues to chug along, its Oct. 11th episode, hosted by recent-fan favorite Bill Hader, yielded a disastrous 1.8 Nielsen rating amongst adults aged 18-49, making it the least watched episode in the show’s prestigious run. But, if it is indeed time to conduct an early autopsy on this historic program, then I’m left with no choice but to grab my scalpel and plunge.
Perhaps the most successful television series of all time, “SNL” has been the staple of the comedy genre for as long as its run, filling American homes with laughter through multiple generations, and producing sketches that have become nothing short of iconic. It has also developed some of the more notable comedians of the last few decades—the show’s cast list through the years is peppered with names of performers that have gone on to hugely successful careers (including Steve Martin, Will Ferrell, Chris Rock, Tina Fey, and Kristen Wiig, to name a paltry few). But its greatest effect was in its elevation of the sketch-comedy medium to a seemingly invulnerable position.

The last decade saw the popularity of canned laugh-track sitcoms give way to the prominence of more subtle, single-camera shows that didn’t need to tell viewers when to laugh. Through this transition, “SNL” remained impervious, continually finding an audience for its spontaneous, live-performed sketches. This was especially true during election years, when the show’s cast thrived on satirizing the nation’s politicians, and ratings boomed as a result. But recently, it feels like the series’ sketches rarely garner any notable attention, and this season’s critical reception has dipped as well. For a series whose formula is anything but short-lived, what has brought about its recent downfall?

Simply put, the culprit is the internet. These days, it seems almost cliché to blame the World Wide Web for destroying a paradigm of yesterday’s society, but the mass-murderer of many of the aspects of the 20th century has apparently struck again. With the advent of the viral video, people can now access brief, noncommittal comedy bits as many times as they please at their own pace. With this accessibility, “SNL” begins to feel obsolete when its viewers can experience its sketches, along with dozens of others, at their own leisure on YouTube. With the celebrity monologue and sketches no longer exclusive to the show’s airing, all that’s left to entice viewers to tune in is the musical guest, which, unsurprisingly, isn’t drawing that many viewers in at 12:10am on Saturday night. The novelty and glamour of airing live on television (the show’s main selling point) is thus extinguished. Like so many classic entities before it, “Saturday Night Live” has finally begun to feel like a relic from the past.

So where does the series go from here? To consider ending it now is obviously reactionary, and premature. It’s not as though there is any real competition in the Saturday night time slot, and the show still has the next election season to give itself a boost. But, when a perennial television giant like “SNL” begins to look like a show that’s completely lost its way, it makes me realize that nothing can last forever. There comes a point when a beloved show is, indeed, over.