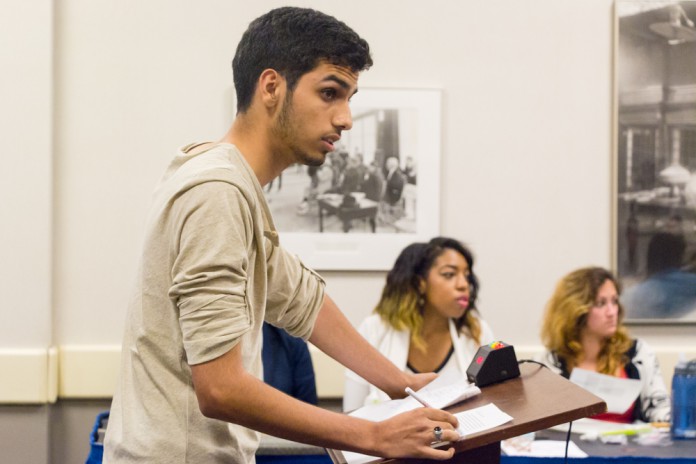 The Associated Students Senate began the 2014-2015 academic year with their first meeting of fall quarter on Wednesday, Oct. 8, during which they discussed University of California Police Department Halloween protocol and ongoing negotiations with the Graduate Student Association.

Chief of Police Dustin Olsen, Public Relations Specialist Ariel Bournes, and Officer Alexis Dougherty were in attendance as representatives from UCPD. They shared that the police department has increased their number of patrols, particularly on campus and in Isla Vista, on Friday and Saturday nights. These patrols have included UCPD officers from other UC campuses, which have been supporting University of California, Santa Barbara since the events of May 23.

“We are really trying to make sure the community feels safe and is safe,” said Olsen. “With that, we also have some sobriety checkpoints… leading up through Halloween, and certainly we have been really busy and engaged getting ready for Halloween.”

Olsen stated that the ten UC campus police departments participate in ongoing system-wide training and have spent the past two years focusing on crowd control training. Although the officers from other UC campuses are not as experienced with Isla Vista culture, they have received the same training as UCSB police and have been in collaboration in order to be equipped to handle Halloween weekend.

During the Executive Officers’ Reports, AS President Ali Guthy discussed negotiations with the Graduate Student Association over the use of the GSA lounge by undergraduate students.

“We entered negotiations with the Graduate Students Association mid-September over the usage of the GSA lounge, which, as you all know, a lot of our groups in AS utilize for standing meetings,” said Guthy.

The Environmental Affairs Board and the Family Literacy Program are two of the many student organizations that meet weekly in the GSA lounge. Despite this, GSA notified AS mid-September of their decision to rescind the undergraduate student usage of the GSA lounge.

“They were open to allowing undergraduate students to use the lounge on a case-by-case basis, but they were not interested in allowing undergraduates to use the space as standing meeting time,” said Guthy. “We are hoping to continue our negotiations and our dialogue [but] I do not believe that this is a positive dialogue for either of our student associations. We really should be working together for all students at UCSB. We have had a longstanding history of mutual cooperation and working together.”

Later that evening, Letters and Science Collegiate Senator Zach Goulhiane motioned for a directional resolution to suspend the GSA privileges funded by AS–such as free usage of the Legal Resource Center, recycling provided to the GSA lounge by AS Recycling, and $250 in startup funds to any graduate student in an Office of Student Life organization–due to the exchange of resources being no longer economically viable for undergraduates. The motion also called for the reallocation of funding for these programs, moving the funds instead to the groups that normally meet at the GSA lounge in order to fund new meeting spaces. The motion passed with a 20-3-1 vote.

In her Executive Officer Report, Internal Vice President Angela Lau shed light on the recent “I Heart UCSB” campaign. Students are encouraged to take the “I Heart UCSB” pledge, and large rubber ducks are used to spread awareness about the campaign. UCSB students, faculty, and staff are challenged to post a picture of themselves with the duck, depicting why they love UCSB, and using the hashtag #IHeartUCSB.

“Essentially, [we] are trying to make it an Internet phenomenon,” said Lau. “There is no directory of why UCSB is so awesome, so this is a way to lead away from all of the horrible things that have happened at UCSB and remember why we love this place.”