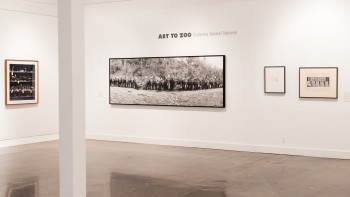 As one first enters the gallery and first experiences the Art to Zoo: Exploring Animal Natures exhibit, it is difficult to not be taken aback by the richness and detail of the photographs, and the beauty and strength of the animals within them. The use of black-and-white and sepia filters used in many of the photographs inspires a sense of awe when admiring the glorious creatures, which brings forth a flood of respect for them. Ranging from elephants to termites, each photograph does an admirable job in showcasing the allure and power possessed by each creature.

Upon entering University of California, Santa Barbara’s College of Creative Studies Gallery (where this exhibit was held until Oct. 19, before moving to the Santa Barbara Museum of Art), it is made apparent that there exists a distinct lack of a human presence; the room itself is completely empty, untouched by furniture or man-made paraphernalia except for the pieces themselves. They are left on their own so as to let the animals speak for themselves, and they do so in a very intense and thought-provoking manner. Although most of the pieces include only the animals, a few have some sort of human involvement, but Homo sapiens are always only playing a supporting role in the interaction, as the true focus remains on the animal. The people featured in these pieces are not at all invasive and the interactions between beast and man come off as fascinatingly natural and positive, as if to help the animal shine brighter. A prime example of this is Harold Edgerton’s “Rising Dove,” in which a person is setting a dove free towards a better-illuminated area while the person is fading to black in the background. This is also illustrated in Jacques-Henri Lartigue’s “Bois de Boulogne Monsieur Folletete Le Secretaire de Papa avec son chien Tupy, Paris,” in which a small dog is captured soaring through the air across a creek with the help of a man who is still positioned in the manner in which the dog left his arms when he tossed it over.

Continuing through the exhibit, Robert Westrich’s “Bataleur 1” is one of the most striking pieces, in which the impressiveness of the bald eagle is captured, as it is looking over its shoulder at the camera, wings at the ready. This photograph showcases the intensity in the eagle’s eyes, and it seems as if the appreciator can almost feel the creature’s heightened senses as it is prepared to take flight at any moment–which captures the essence of the term “fight or flight.” The same could be said about Shaun Walton’s piece, “Nocturnus 5,” in which the majesty and power of a lion is captured as he stares off into the distance with focused eyes while drooling. This image along with the black background gave the piece a spirit of mystery and suspense as he looks ready to pounce at any given time.

The exhibit did not discriminate against size, either. One of the pieces, simply entitled “Termite,” shows us a close-up view of the common insect, but photographer Roman Vishniac conveys the overlooked dignity of the creature mostly thought of as a nuisance. By honoring this pest, one can truly get a sense of the overarching and all-encompassing beauty of all branches of the animal kingdom.

The Art to Zoo: Exploring Animal Natures exhibit was a memorable one and, the experience will not be soon forgotten. Each piece had its own story to tell and its own unique way to tell it. As of Sunday, the exhibit has been moved back to the Santa Barbara Museum of Art, but anyone interested in photography, zoology, or anyone who likes animals should experience this exhibit, because it is definitely worth the trip .