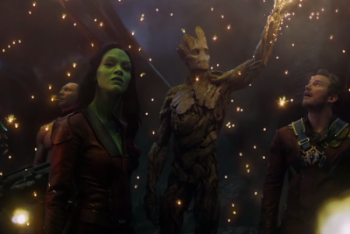 After blasting off to an August-record $94 million dollar box office in its first weekend, I assume many of you have seen the new Marvel film “Guardians of the Galaxy,” and if you haven’t, go see it now. Really. Right now. I give you permission to not read the rest of my review beforehand. And, don’t worry; this will still be here when you’re done.

Okay…did you see it? And, if you haven’t seen it yet, I guess I’ll try not to ruin anything or whatever. So, are we ready? Good. Wasn’t it AWESOME?! Like, seriously, it was one of the best times I have ever had at the movie theatre. This movie really just has it all: action, adventure, comedy, talking raccoons, space travel, crazy costumes, John C. Reilly, and pretty much everything else you could want from the first Marvel film that truly held nothing back.

But that is not to mean that it was overly ridiculous or confusing, because it certainly wasn’t. The potentially far out plot resolves itself into a straightforward “race” between three factions to steal a mythical orb, rooting this film in the beloved “Space Western” genre. This fairly simple, yet engaging, plot allows for a great amount of freedom for all of the lovable and thoroughly entertaining characters to interact amongst each other (which, outside of the action, is the best part of these superhero team films).

Moreover, this film demonstrates the quickest wit and best repartee of all the Marvel films to date. Featuring a great ensemble cast led by certified lady-boner material and up-and-coming leading man Chris Pratt as Peter Quill (aka Star-Lord), sci-fi veteran Zoe Saldana as the best looking green alien you have ever seen, pro wrestler Dave Bautista as the angry mass known as Drax the Destroyer, with Vin Diesel providing the voice of the vocabulary-challenged tree-like humanoid Groot, and Bradley Cooper as the wise-cracking, quick-to-anger talking raccoon Rocket, the cast perfectly relays the surprisingly hilarious dialogue laid down by writer-director James Gunn. If it were not for the exciting fighting scenes and action-fueled plot, one might even consider this film to be a comedy, as it kept me in stitches throughout its entire run time.

But, the brilliant special effects, beautiful stratoscapes, and well-directed action scenes are just as impressive as the dialogue, and they kept me as riveted and entranced as Rosie at a hypnotherapist’s. The antagonists were complex and well thought out, and include two of my personal favorite lesser-known actors: Lee Pace, recently notable for his stint in the new “Hobbit” trilogy, and Karen Gillan of “Doctor Who” fame (who I may or may not have let out an excited squeal when I first saw). But, let’s be honest, I was squealing with excitement throughout this entire film-it was really that good. It fulfills nearly all that one could want from a summer blockbuster, and appeals to the super-hardcore comic book fan, the clueless aunt who is visiting your family for the summer, and everyone in between, especially you.