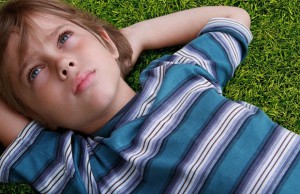 The day after I saw “Boyhood,” I found my thoughts intermittently returning to the film and the overall enjoyment that it created. However, I had trouble pinpointing exactly what it was that engaged me so completely. Later that evening, Jon Stewart described my feelings perfectly in a “Daily Show” re-run featuring “Boyhood” writer-director Richard Linklater.

“It’s hard not to process your own life within it,” Stewart said.

Groundbreaking in his decision to tackle a 12-year shooting schedule, Linklater did not craft an altogether plot-driven film. Instead, “Boyhood” provides moviegoers with the rare opportunity to grow alongside its main character because, as Ellar Coltrane’s character Mason puts it, “it’s like it’s always right now.”

This line is delivered at the end of our journey in response to the stoned, would-be philosophical musings of a fellow college freshman that Mason has just met. She has just arrived at the kind of universal adolescent revelation that every teenager assumes is the product of his or her own ingenuity: “You know how everyone’s always saying seize the moment?” she asks. “I don’t know, I’m kind of thinking it’s the other way around, you know, like the moment seizes us.”

This exchange, punctuated by a fourth-wall-breaking glance by Coltrane so brief we question its intentionality, perfectly captures the premise of “Boyhood”—a premise which is incredibly, beautifully simple. It’s the coming-of-age story we all know and can relate to, because we are there, actively growing and maturing with Mason over the film’s 12-year span.

It is this timetable and this utter simplicity and understanding that validate Stewart’s comment on the movie. The introspective effect of “Boyhood” on its audiences is immediate and induces self-reflection from the opening shot of six-year-old Mason lying in the grass and staring at a blue Texas sky.

Though audiences get to know Mason over the course of his beautifully scripted life, this six year-old is the Mason that we can relate to most. This is the point at which the child on screen is more Coltrane than he his Mason; a little boy just being himself before a camera crew. It is the point where we can most easily juxtapose our younger selves with this boy and contemplate how those prototypal versions came to be the selves we are familiar with today. From there, it was key that the process of Mason’s growth maintain its authenticity, even as Coltrane grew more aware of the separation between himself and his role.

Therefore, the authenticity of Mason’s on-screen maturation can largely be attributed to the dual development of Mason as a character and Coltrane as an actor. At age six, we see a boy acting naturally in front of a camera, but by age 18 we can tell Coltrane has achieved mastery of the role, still conveying just enough of his own persona while crafting a character distinct from himself.

“Boyhood” relies on remarkably simple plot points to propel its nearly three-hour storyline. Though Linklater gives himself numerous opportunities to send the story in a darker direction—by way of abusive, alcoholic stepfathers, a father with reliability issues, and teenage angst, “Boyhood” remains rooted in its normalcy, and turns the more ordinary and relatable story into something extraordinary.

Sure, Mason has moments of teenage debauchery throughout his adolescence—breaking curfew on occasion, smoking pot, and drinking at parties (sound familiar?). During one of his high school classes, we watch Mason’s photography mentor lecture him about slacking off, urging him to fulfill his artistic potential. But ultimately, as he teeters on the precipice of adulthood, Mason finds himself college-bound, hoping to cultivate a talent and a future—reenacting the narrative of so many 18-year-olds before him.

Ethan Hawke, in the role of Mason, Sr., delivers a bit of wisdom during a round of bowling with his kids that just might sum up “Boyhood”’s message to the masses: “You don’t want the bumpers. Life doesn’t give you bumpers.”

And as the story unfolds, the lives of this Texas family do not prove to be exempt from that rule. Throughout the film, Linklater chooses not to send Mason down a path of self-destruction and refuses to let any of his loved ones, namely father Mason, Sr., mother Olivia, and sister Samantha, become consumed by their negative circumstances either. Instead, he chooses to craft a portrait of life as most humans experience it: not without its challenges, unpredictable, and often unrewarding of even the most selfless behavior, but ultimately entirely human.

Not every misstep or threat must end in spectacular defeat; it’s that whole “living and learning” thing, Linklater reminds us. Sometimes life is just normal, and sometimes that is more than enough.

“Boyhood”’s goal is not to shock and amaze moviegoers with visual effects or clever plot twists—instead, it seeks to pay homage to the ordinary. And in an unprecedented turn of events, it is absolutely beautiful.