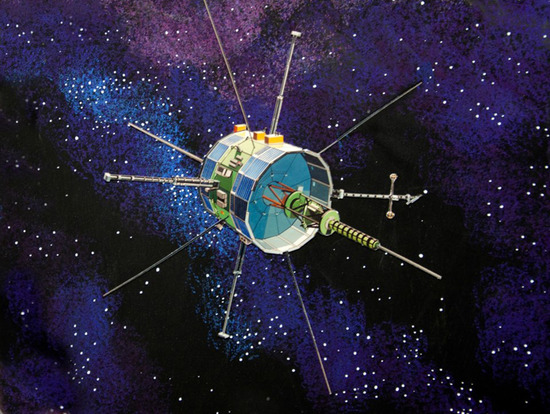 A crew of space enthusiasts in Mountain View, California, in cooperation with NASA, have taken control of a 36-year-old inactive satellite that was originally put into orbit to study solar weather in order to beam publicly accessible data of multiple kinds for the next few decades.

The ISEE-3 satellite was launched by NASA in 1978 and has been inactive for about 20 years; its battery died decades ago but because it had been equipped with solar power, scientists knew it would eventually return to Earth’s orbit after many years of floating in space. Now, with some crowdfunding and an industrious team led by former NASA employee Keith Cowing, the ISEE-3 has become the first civilian-controlled satellite that will continue to beam.

Although the satellite’s battery has been dead for some time, it had been built for longevity with very simple technology. Thus, getting it back up would require a few outdated parts, but it could be done. Cowing’s team set up shop in an old McDonald’s and raised $160,000 for their project. After tinkering with old NASA technology, they made contact with ISEE-3 on May 29, 2014, according to Motherboard.

“We’re trying to rekindle the language that this craft is speaking,” said Cowing in a live Google Hangout, “and understand the numbers, and then we’re going to post the data online as soon as we get it, which is unusual for a spacecraft like this.”

Once the team was able to communicate with the satellite, they established a new orbit around the Sun, which is slightly larger than the Earth’s orbit. It will remain close enough to Earth for a while, allowing the community to run tests for a long time. Although the time is uncertain, Cowing’s team will constantly be taking in solar weather data and sharing it with everyone.

Up until now, NASA would collect data for a project and process it in private before releasing it to the public. However, the data for ISEE-3 is available to anyone who wants access to it. Google has been helping with the project by building a site that will open up the data collected from the satellite to the world. Everything coming from the satellite will be available to anyone with Internet access, according to BetaBeat.

Cowing had recently completed a project with co-lead Dennis Wingo in which they recovered images from an old Apollo-era lunar mission. In 2008, the Lunar Orbiter Image Recovery Project (LOIRP), lead by Cowing and Wingo, was able to track and restore original tapes to their full resolution. The LOIRP project was the first project that Cowing’s team had done in McMoon’s, and their images can be found online for the public to view and admire, similar to the data collected from ISEE-3.

With the data and findings collected being launched for anyone to see, anybody who wants to look into the science or learn more about the spacecraft can take part. Cowing’s thought process is that if their team was able to do it through crowdfunding and old equipment, other people could do it too.

“Space people have a sort of arrogance,” Mr. Cowing said. “I used to be that way, but now I’m revolted by the thought that people without a pocket protector and calculator feel like they can’t be involved.”

The appeal of opening up the data is clear; if anyone can access the main source, the crowd can bring back fresh results and observations that a small academic team might overlook. Open data such as this are a growing trend in industries such as infrastructure and energy that are in need of innovation.

“I think a lot of people get soft when you don’t have to be creative,” Cowing stated. “The easiest way to be creative is to have to get by with less. You know, ‘necessity is the mother of invention,’ and you know, when all you have is old computers, you have to make them work.”