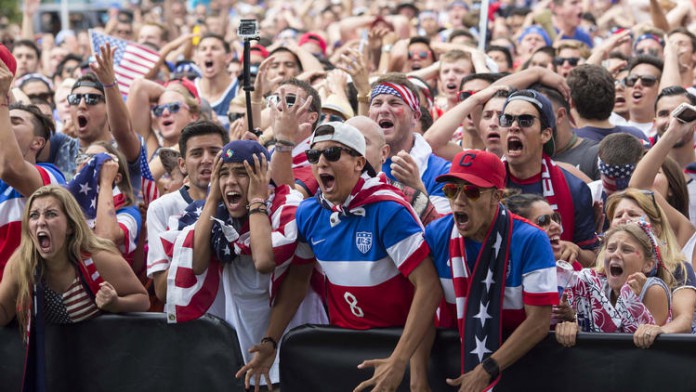 NBC News’ Bill Neely said in his June 23 report on Team USA’s 2-2 tie with Portugal that this year’s World Cup performance “may prove to be the turning point for soccer in the United States.” Now that the U.S. is officially out of the World Cup, will America still care about soccer?

Unfortunately, Neely’s statement is all too familiar. The same predictions have emerged over the past forty years–all to no avail–such as when Pelé came to play for the New York Cosmos back in 1971, Brandi Chastain ripped off her jersey in the U.S. Women’s World Cup in 1999, and David Beckham arrived in 2007 for the Los Angeles Galaxy. At the time, these events were huge steps for soccer in the U.S., but they were ultimately steps on a staircase to nowhere.

Is the 2014 World Cup the be-all and end-all to keeping soccer a point of interest in the U.S.? According to the ratings, the answer may be yes: Forbes reported that the U.S.’s 2-1 defeat of Ghana had 11 million viewers, resulting in the highest-rated and most-viewed men’s soccer match ever on ESPN or ESPN2. According to the Nielsen ratings company, the match between the U.S. and Portugal drew an average of 24.7 million viewers, effectively placing it above the recent NBA finals.

Despite these ratings, history will tell us that this entire hullabaloo is temporary. Let’s observe some contingencies of the World Cup: first of all, it’s summer. The National Center for Education Statistics estimates that there are over 24 million college students in America, and another 17 million in high school–most of which all still enjoy the wonders of “summer.” Give University of California, Santa Barbara summer students a national sporting event, and they’ll be all over it thanks to the combination of Cox, June gloom, and American pride. Furthermore, the only other sport that is in season is baseball, leaving sport fanatics twiddling their thumbs.

Moreover, social media plays a vital role in today’s society. Facebook stated that 10 million people had 20 million interactions during the U.S.–Portugal match. To put this in perspective: during the 2010 World Cup in South Africa, Facebook was still two years away from going public, Pinterest was two months old, and Instagram didn’t exist. It’s no wonder there’s a spike in interest in the World Cup this year, because thanks to social media, if you’re not watching, people will know, and if you are, you’ll get social gratification.

Lastly, and probably the most influential aspect of the World Cup, is the fact that it is an international event; it’s a chance to wear red white and blue and sing the national anthem – because we’re American and we’re the best country there is. Does anybody follow swimming or gymnastics outside of the Olympics? Probably not. But every four years you can bet your bottom dollar that all of America will be sporting a jersey and a hat while sitting on the edge of their seat. Soccer in the World Cup–just like swimming in the Olympics–is exciting in the name of patriotism, and it will only get our attention every four years.

These contingencies cloud the genuine U.S. interest in soccer as there are fundamental aspects of the sport that impede Major League Soccer team flags from being pinned on household walls. First of all, baseball is and will always be known as “America’s favorite pastime,” with the NFL slowly encroaching on this title, and basketball also inhabiting a top spot. Moreover, the structure of soccer is at odds with these alternatives. Baseball, football, basketball, and hockey are all games with relatively high scoring coupled with intermittent breaks that are practically designed for American consumerism via commercials. On the contrary, soccer is a sport played with two 45-minute halves resulting in only one short break (cue gasp from advertising agencies). Soccer does not have the short bursts of action and chance for success and failure on every play that other sports do.

Soccer is a sport that enrolls students at the young age of 4, while football can’t be played until kids are 11. By the time high school rolls around, 1 million boys are playing football while only 284,000 are playing soccer.  It’s unclear whether kids choose football over soccer because football is more popular nationally, or if football is more popular nationally because more kids decide to play it. Either way, something in American culture necessitates the majority of kids to choose another sport over soccer when they’re given the choice. Moreover, even if kids are showing an interest in soccer at the professional level, they turn to affluent European leagues like the Premier League over the relatively indigent MLS. It’s a downward spiral that leaves MLS on the sidelines.

The popularity of the 2014 World Cup is all smoke and mirrors granted by the summer season, social media, and national pride. An analyst at RBC Capital Markets, David Bank, claimed that Fox will pay an estimated $203 million for the 2018 World Cup, a huge jump from the $55 million ESPN is paying for this year’s tournament. Fingers crossed for Fox that America will tune in for soccer in four years–it probably will, but until then it will be left on the bench.