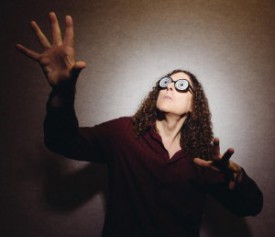 On July 15, “Weird Al” Yankovic released his 14th album of 12 affectionate song parodies, putting his own humorous spin on currently popular songs. However, unlike with his previous albums, Yankovic decided to promote “Mandatory Fun” in a different way: with a significant focus on the internet.

To promote the release of his new album, “Mandatory Fun,” Weird Al Yankovic unveiled eight new music videos within eight days. Entries include “Tacky,” a parody of Pharrell Williams’s “Happy”; “Word Crimes,” a play on Robin Thicke’s “Blurred Lines” that tickles the English major inside us all; “Foil,” a conspiracy theory-fueled takeoff of Lorde’s “Royals”; “Handy,” based on Iggy Azalea’s “Fancy”; and “Sports Song,” a hilariously mean-spirited school fight song.

“I wanted the first week to be big,” Yankovic said in an interview given to NPR. “I wanted every single day of release week to be an event. I wanted a video to go viral for an entire day and have people talking about that video, and then the next day they’re talking about a new video. I just thought that would be a really fun way to do it, to make a big deal out of release week.”

It was at Cal Poly SLO that Yankovic first performed on a university radio show and recorded his first published piece, a parody of the song “My Sharona” by The Knack, titled “My Bologna.” The parody’s success jumpstarted his highly successful career, which now spans nearly forty years, and includes fourteen studio albums, a celebrated box set, films, and countless music videos.

Yankovic’s parodies consist of nearly identical replications of popular songs, but with the lyrics changed to portray a more lighthearted, humorous, and oftentimes innocent slant. “I didn’t set out to be a family-friendly recording artist,” said Yankovic, according to NPR, “but that’s sort of the way it happened, and it’s a wonderful thing.”

Yankovic’s latest album, “Mandatory Fun,” will also be the last of his 32-year record deal. “After this I think I’m just going to be releasing singles,” Yankovic said to Business Insider, “because the stuff I do is topical and timely and if I wait until I have twelve songs and put out an album, chances are a lot of those songs aren’t going to be topical and timely.”

The videos premiered every morning at 9 AM on his website until July 21, where they can still be found. The full album is available in stores, and for download on iTunes and Amazon.