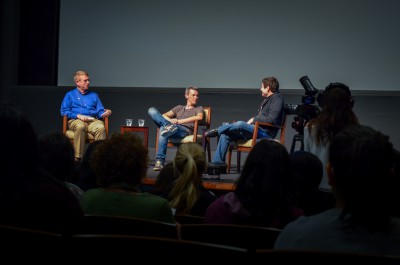 Like most of the people who attended the University of California, Santa Barbara Carsey-Wolfe Center’s early screening of the movie adaptation of John Green’s “The Fault in Our Stars” on May 28, I expected to cry. Within a few moments of the well-crafted film, I knew that crying was a certainty.

Two teens with cancer falling in love is a recipe for heartbreak–both for the characters who live in the carefully constructed world and for the viewers who can only watch as the events of the film unfold. Emotionally heartfelt and genuine, the film tugged at my heartstrings in the best possible way. It was a bittersweet and cleansing hurt that felt all the more poignant in the wake of the tragedy that struck our community just the weekend before.

Love stories featuring a female lead that wears no makeup (and carries around an oxygen tank) are not even close to common in Hollywood, placing “The Fault in Our Stars” in a unique situation. The film’s central romance plays out between Hazel Grace Lancaster, portrayed by rising star Shailene Woodley, and Augustus Waters, played by newcomer Ansel Elgort. The chemistry between the two actors is palpable, which makes their tragic love story that unfolds all the more believable.

Going beyond her teenage television roots, Woodley skillfully navigates Hazel’s difficult emotional rollercoaster with care. Director Josh Boone was not initially convinced that Woodley could play the part of Hazel, but the starlet immediately won him over.

“She auditioned with the fake eulogy scene, and it was over. It was done within a couple minutes,” said Boone during the post-screening Q&A at Pollock Theater.

Woodley pulls off the sarcastic character perfectly, capturing the character’s magnetism and inner turmoil with a convincing physicality. But even more magnetic is the character of Augustus, who is both charismatic and pretentious in parts. Elgort’s chemistry with Woodley is convincing and compelling.

My main criticism of the film, however, does lie in the choices made in the portrayal of Augustus. Even when I read the book, I found the early romance between Hazel and Augustus a bit implausible. Perhaps it was because the character was on film and not on the page, but I found the early characterization of Augustus to have verged into the territory of distasteful. I wonder if Augustus’s actions, which border on the aggressive, would have been deemed acceptable by Hazel and indeed the audience if Augustus’s character had not been so attractive. Hazel’s furious primping in the bathroom after their meeting is evidence of her immediate attraction. It is unlikely that Hazel would have responded as positively to Augustus’s prolonged eye contact and nearly-intrusive questioning if she had not found him good-looking.

“The book is so moving and powerful. We didn’t want to mess it up,” said executive producer Isaac Klausner, who was also present at the Q&A.

The film follows the source material extraordinarily closely, with the exception of a few carefully chosen changes at the end of the film to heighten the impact.

“We wanted to get a tone in the film that will approximate what reading it felt like,” said Boone.

I followed the journey of Hazel and Augustus with the knowledge that their story was inevitable, tragic, and beautiful. Though it might break some hearts and cause some major waterworks, I highly recommend seeing “The Fault in Our Stars.”