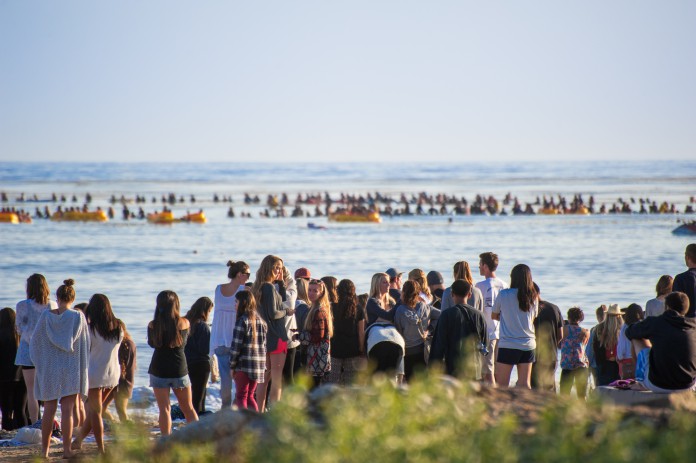 Thousands of Isla Vista community members took to the water on Wednesday, May 28, at 6:30 p.m. to participate in a Memorial Paddle Out event to honor the six University of California, Santa Barbara students who lost their lives during Friday’s rampage.

Many participants gathered at the beach just north of Campus Point before heading out into the ocean to form a giant circle of bodies. Those in attendance made use of many different flotation devices, including stand up paddleboards, surfboards, kayaks, and rafts. Many people shared their equipment, further cementing the unity of those on the water.

Cary Spurrier, a third-year aquatic biology major, explained why he participated in the Paddle Out.

“I wanted to do something with the Isla Vista community that could stand as another type of memorial for the students we lost,” said Spurrier. “It seemed like a suitable way for myself and members of the IV community to pay our respects to them in some way.”

Not all participants had a way to float, so there was a massive crowd standing in solidarity on the shore.

The event was coordinated by the UCSB Surf Team, who had everyone hold hands in a large circle. They spoke of the strength the community has shown and how, in order to heal, people need to move toward the future with love and peace in their hearts. As the paddle out circle cheered, those standing on shore could be heard cheering as well.

“It was the largest turnout for a paddle out that I have been to,” said Scott Henson, a fourth-year psychology major who volunteered at the event as a lifeguard. “It was nice to see our community come together like that.”

The event coordinators released a lei in the water for each of the victims of the shooting: James Hong, George Chen, David Wang, Katherine Cooper, Veronika Weiss, and Christopher Ross Michaels-Martinez. The releasing of the leis was followed by a moment of silence.

At the conclusion of the moment of silence, the crowd sang, “Ole! Ole, ole, ole! Gauchos! Gauchos!”

Once the participants quieted down again, the coordinators of the event encouraged everyone to paddle around the circle and meet new people.

“The massive turnout and the friendliness of everyone at the event were the things that stood out most to me,” Spurrier said.