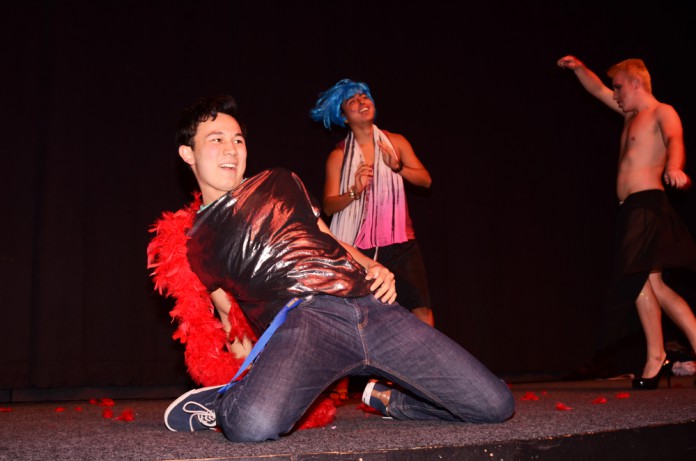 In an array of colorful wigs, sky high heels, and glitter, Isla Vista Theater was transformed into a drag queen extravaganza on the evening of May 9. As one of the many events for Pride Week 2014 at the University of California, Santa Barbara, the annual student-run drag show flaunted not only fierce fashion and personalities, but it also created a welcoming and safe environment where anyone’s inner diva could come out and play.

The audience was introduced to the emcee, the confident and exuberant Nick Newton (stage name Avery Daniels), with a loud blaring of  “Hole Pic,” which is William Belli’s hilarious parody of the song “#Selfie.” From then on, the room was filled with nothing but laughs and love from the audience. The many acts that continued consisted of hilarious lip-synching to up-beat and female empowering songs by the drag queens from artists like Katy Perry, Britney Spears, and Gloria Gaynor.

However, one number in particular stood out because it was so different from the others. Alex Eisenhart (stage name Alexandra Divine) instead of lip-synching, sang a cappella about loving his life as a drag queen. His deep and resounding voice rang through the theater with great clarity. It was a moment of vulnerability and absolute fearlessness that received a standing ovation from the audience.

“I think this is an event that needs to be seen every year,” said Chris Buck, a second-year sociology and financial mathematics and statistics double major who organized the student-run drag show. “It’s an event where we can all be happy together and have a good time, and it really gets students involved.”

And involved they were. In between acts done by drag queens, the Diva Games were held. These consisted of male students from the audience who would volunteer to head up on stage, get adorned in everything from bright yellow dresses to red feather boas, and have a dance off with each other. There were two rounds of Diva Games, narrowing the participants from six to three, but everyone on stage truly let their inner divas shine, accompanied by some incredible dance moves. All the volunteers received Pride t-shirts and tons of appreciation by the drag queens and audience members.

Jake Harries, a first-year undeclared major and participant of the Diva Games, said, “I got up there because I knew Athena would want me to and I was just feeling it–and why not?” Athena Lunar, or Joel Moxez, is Harries’s mentor for UCSB’s Queer Straight Union (QSU).

This event would not have been made possible without QSU, a political and social student group interested in promoting a safer and more supportive atmosphere for everyone in the queer community. The drag queens are the “mothers” or mentors to students, and those connections were the roots of this amazing event. Anyone is welcomed to get involved with QSU, which has weekly meetings at the UCen.

After the hour and a half show, the audience members were welcomed on stage for a meet and greet with the drag queens–perfect for photo ops and selfies. In an interview, Newton shined light upon the importance of drag for self expression in a fun and well-received way.

“I’ve always been different than most boys,” said Newton, “and being feminine as a guy is kind of looked down upon by a lot of people, which is sad, so drag is one of the only times in my life where I can express a different side of me and not be shamed for it, but be exalted and praised for it.”

Students loved every minute of it. “The show was great and all the queens were beautiful,” said Winnie Tsang, a third-year biopsychology major. “It was my first time going to the student-run drag show and it really showed me pride week.”

Now that the glitter has settled and the wigs and costumes have been packed, students can smile from the memory of this year’s drag show and anticipate next year’s, because it will surely be another huge celebration of love, acceptance, and expression.