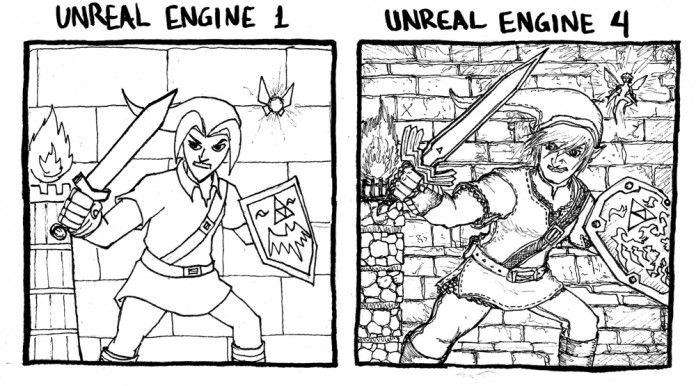 Imagine the 64-bit world of “The Legend of Zelda: Ocarina of Time” brought to near photorealism through the power of a brand-new graphical engine. You can stop imagining now; it has already been done.

With Epic Games’ recent release of Unreal Engine 4 (UE4) to the public, indie and triple-A game studios alike have rushed to get their hands on the new software that can bring video games to a graphical level never seen before. According to ExtremeTech, one graphic designer and video game devotee in particular, Michael Eurek, recreated the interior of the Temple of Time from the Nintendo 64 game “The Legend of Zelda: Ocarina of Time” (1998) with UE4, and the result looks better than many video games that are on the market today. Epic Games’ price tag for the software is a $19 per month subscription, a relatively inexpensive cost that allows professional and amateur developers alike to create game environments with stunning graphical capability.

UE4’s inclusion of advanced particle effects is part of the reason that it excels graphically. According to Gamasutra, particle effects allow for the rendering of fuzzy or abstract phenomena that would not otherwise be replicable. Things such as fire, smoke, moving water, sparks, fog, dust, and stars all will look near photorealistic with UE4, and are sure to elicit “oohs” and “aahs” from all manner of gamers.

UE4 also features enhanced lighting effects with subsurface scattering, which, according to Renderman, allows for the realistic rendering of translucent materials such as skin, fruits, and milk, among others. It is also responsible for effects like color bleeding inside materials, or the diffusion of light across shadow boundaries. In layman’s terms, subsurface scattering would be responsible for light filtering through a stained glass window or beaming through the collectible gems, such as those in the aforementioned reincarnation of the Temple of Time.

It is difficult to imagine video games looking even more beautiful than they do right now. Unreal Engine 3, the predecessor to UE4, spawned many visually breathtaking games, including “BioShock Infinite” (2013), while other engines such as Frostbite 3 produced their fair share of graphical marvels, such as “Battlefield 4” (2013). But this has been the case in video gaming for decades; just when players believe games can’t look any better, they manage to improve.

Although the graphical and physical improvements Unreal Engine 4 brings to the table is exciting, Epic Games’ plans don’t stop there. According to Polygon, the company looks to finalize its initial support for Project Morpheus, Sony’s Playstation 4 virtual reality headset. We are living in a time when video game technology advances faster than we can adapt to its current incarnation. Perhaps in the next decade or so, gamers, through virtual reality, will themselves be able to explore the Temple of Time they had only previously been able to experience on a tiny, two-dimensional screen.

Health in America: A Psychosocial Perspective