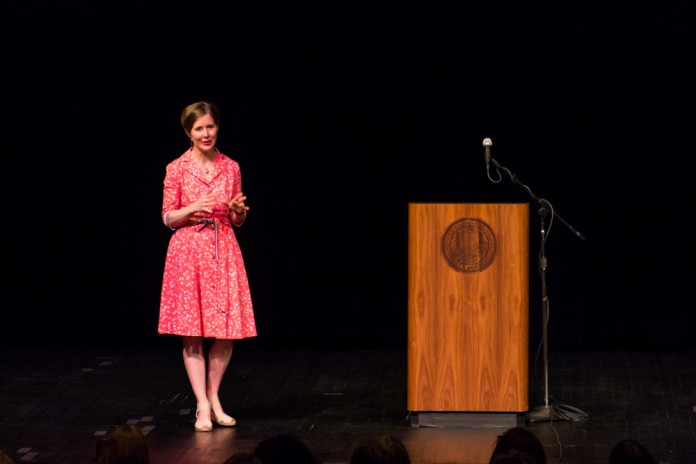 Ann Patchett, an author and owner of an independent bookstore in Nashville, spoke at Campbell Hall on Tuesday, May 6, about her career and business.

She has written several novels, including “Bel Canto,” “Run,” and “This Is the Story of a Happy Marriage.” Patchett was also on TIME Magazine’s Top 100 list of the most influential people in the world in 2012. She attended Sarah Lawrence College and, before she graduated, published her first article in The Paris Review.

From there, Patchett worked at Seventeen Magazine for nine years. During her talk, Patchett said she did not enjoy her time at Seventeen and left after an argument with an editor.

She also wrote for GQ and Vogue, among others, before a friend got a position working for The New York Times Magazine, opening the door for her to also write for the publication. From there, Patchett wrote for Harper’s, The Atlantic, and The Washington Post.

Patchett stated that every time her work was published, she would cut out the article and put it in a Tupperware container. Eventually, a close friend of hers, Niki Castle, convinced her to create a compilation of all of her articles.

She had a difficult time with the articles because everything she wrote encapsulated a small piece of her. She compared the anthology to wearing different dresses at different parties. One might be short but otherwise modest, and another dress could be low-cut but otherwise modest. Once you put the dresses side by side, though, it’s as if there’s very little dress there.

“I couldn’t get past the naked feeling,” Patchett said about her Tupperware articles.

The articles did help her understand herself better, though. In late 2010, Nashville’s major bookstores both closed at the corporate level, leaving the city without a bookstore.

“If you can form the thought, ‘Who’s going to open a bookstore?’, it’s your job,” said Patchett.

Patchett and Karen Hayes teamed up to open an independent bookstore in Nashville–a partnership that has resulted in success. Named Parnassus Books after the mountain in Greece that is sacred to Apollo, the god of poetry in Greek mythology, the store opened in November of 2011.

“The very best thing about opening a bookstore, and why I think you all should go home and open a bookstore… [is that] you know what it is to open a book and love a book,” said Patchett. “That covenant between you and the book is not complete until you can say to someone, ‘You have to read this book.’ I have been forcing my friends and family to read the books I love my entire life, and now I own a store where a river of humans comes through every day.”

As a successful co-owner of an independent bookstore, Patchett has become a spokesperson for independent book selling. She has traveled to talk about her love of books and reach out to people to express how important it is that they support their local businesses.

“It’s as if we, as Americans, are powerless to lower prices,” Patchett said. “What we cherish in our communities need to be supported.”

“You can’t take your whole family to Anthropologie after dinner,” Patchett said. Small businesses create jobs and have countless other benefits said Patchett, saying, “Whether they survive is up to you.”

Once Upon a Time… ‘The Fairytale Lives of Russian Girls’