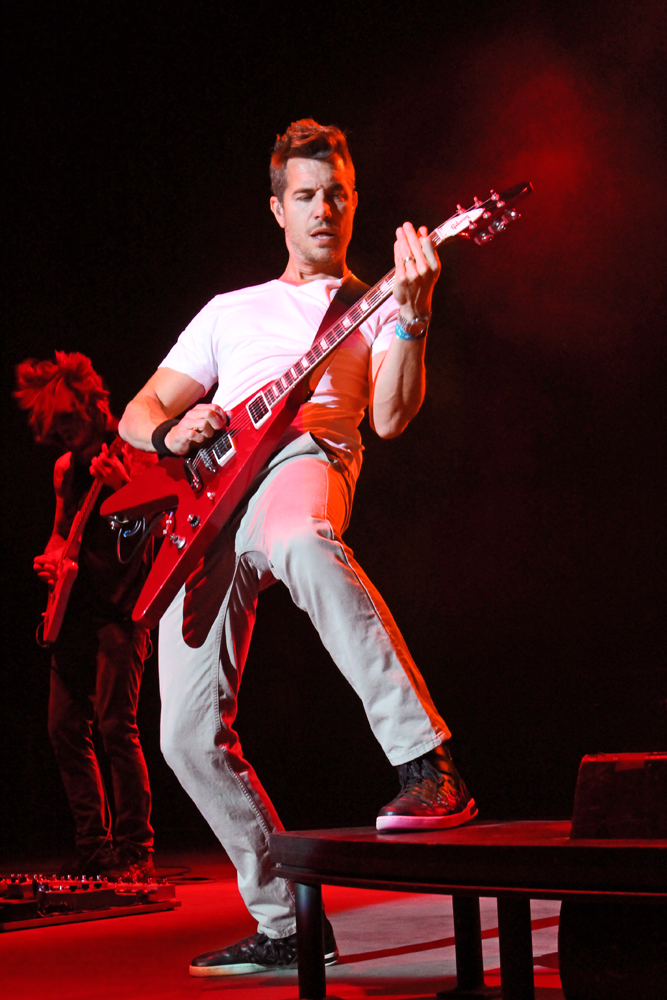 On the cloudless Thursday of May 15, local radio station 92.9 KjEE hosted their 10th annual Summer Roundup at the Santa Barbara Bowl. The concert was headlined by alternative-rock-reggae band 311, and Young the Giant, Big Data, and Birds of Tokyo preceded the main act with indie, electronic, pop-rock jams that caused the Bowl to shake.

Though doors opened at 4 p.m., Birds of Tokyo did not take the stage until over an hour after, giving the early-arriving audience members enough time to stock up on band merchandise. The band’s tunes are the perfect amalgamation of soft rock and indie roots to display the “alternative rock” logo that every performer of the evening had in common.

After their opening song “This Fire,” off their 2013 EP “Lanterns,” lead vocalist Ian Kenny promptly removed his sunglasses, deeming the eyewear as “always so impersonal.” Despite it being a small act, the gesture immediately caused me to feel more connected with Kenny (while, admittedly, I was swooning over his accent).

“We came all the way from the West coast Australia to be here,” Kenny said. “Just kidding, that’s total bullshit. But we are happy to see your beautiful faces. You’re all very handsome.”

The highlight of the performance was surely “Lanterns,” the band’s empowering, youthful ballad to which many fans were singing along.

After a brief intermission, Big Data entered the Bowl. When announced at the beginning of the evening, the band did not seem to be known by attendees, including myself, and I did not know what to expect before the show. So when the performance began with a phony electronic voice projecting from the National Security Administration, I was definitely shocked. The computer repeatedly said, “I am your friend,” and called upon the audience to text, Tweet, and Instagram about the band. After this haunting message, Big Data began performing, defying my expectations (or lack thereof) in the process.

The music juxtaposed electro-dance beats with alternative influences, layering paranoid lyrics on top. Their opening song, “The Stroke of Return,” alluded to their skepticism of the Internet: “They’re looking into the new request / They just require your home address.” Even though I found the lyrics to be slightly unnerving and a bit creepy, I, like many others, was able to focus on the rhythm of the techno-style jams and enjoy the warmth of the sun.

Young the Giant was the band I was most excited for. Though this was my second time seeing the alt-rock icons live, it was indubitably as incredible as the first. As they walked onstage and began playing, fans knew within seconds that the band was opening with “Anagram,” the upbeat song from their sophomore album, “Mind Over Matter.” Frontman Sameer Gadhia energetically clapped, jumped, and flailed his arms around, demonstrating his post-teenage angst-y attitude. Before playing “Firelight”–another new song–Gadhia sang the lyrics “amber is the color of your energy,” to which devoted 311 fans in the audience cheered with appreciation.

“I can tell you guys are ready for 311–you’ve already started with the weed,” said Gadhia. “I love it.”

Excited shouting resounded from the pit and surrounding seats when the band began their final song, “My Body.” This song definitely resulted in the most dancing, as it is an upbeat, youthful anthem, perfectly fitting for a pre-summer evening. Despite the obvious strain in Gadhia’s voice, fans did not seem to mind, and they begged for an encore after the band had to, sadly, leave the stage.

After a nearly 30 minute wait and many eager shouts, 311 entered the Bowl. They pleased their fan-filled audience with both new and old songs, as they were promoting their newest album, “Stereolithic,” released March 11.

Providing the audience with funky rap-punk-alt-rock was their main goal, it seemed, and though there is no particular way to describe the music, a majority of the concert’s attendees were there specifically for 311, and they definitely showed it. Audience involvement–including marijuana use–dramatically increased when the band began performing, and the chill yet energetic vibe resonated from the stands along with the music.

Though I unfortunately had to leave before the event was through, I continued to listen to the alternative sounds of 311 all through my walk out. The KjEE Summer Roundup was a concert for the books, and the positive vibes and eclectic atmosphere was worth braving the heat.