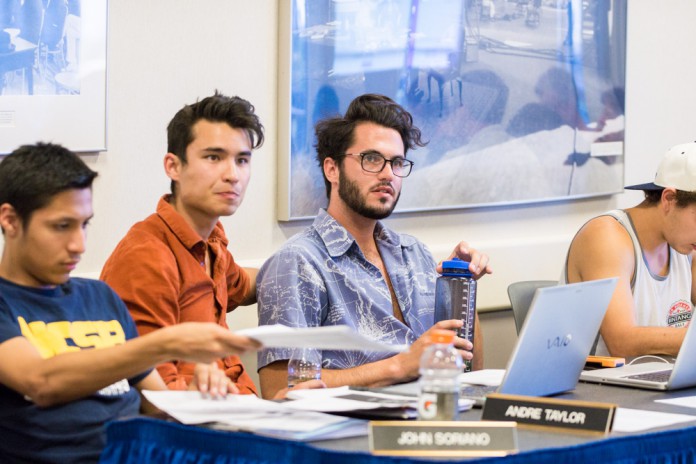 Associated Students Senate discussed two bills authorizing contentious changes to the legal codes of AS Elections Committee and AS Student Lobby at its meeting on Wednesday, May 14.

The bill regarding Elections Committee legal code, tabled at the Senate’s May 7 meeting, is intended to finalize the code for the 2015 General Election of AS government officials. As outlined by the bill, the code must be passed by week seven of the spring quarter preceding the following year’s election.

The terms of the bill also stipulate that after the code is passed, it may not be changed until the conclusion of the next general election.

One change outlined by the legislation was a decrease in the limit imposed on each political party’s campaign budget, from $6,000 to $5,000. Second-year biology major Gold Okafor advocated for this decrease, which she would have preferred limit spending to $2,500, at the previous week’s Senate meeting.

During discussion of the bill later that night, Off-Campus Sen. Andre Theus voiced his opposition to this $1,000 decrease.

At Wednesday night’s public forum, Collegiate Sen. Ansel Lundberg read a student letter aloud to the Senate. This letter called for the implementation of a single transferable vote (STV) system in AS elections, in hopes of leveling the playing field between the two major parties on campus, the Democratic Process (DP) Party and the Open People’s Party (OPP), the latter of which currently dominates the majority of senator and executive positions.

“The fact that a single party has come to dominate the representation of the entire student body represents a failure on the part of UCSB’s Associated Students,” the letter read.

STV is a form of proportional representation that utilizes a ranking system, in which each voter lists each candidate for a certain position in order of preference. A candidate is then elected based on his or her achievement of a certain quota of votes, rather than receiving the majority of votes.

If the candidate given first preference by a voter has already met the quota of votes he or she can receive, the vote will be transferred to that voter’s next preference.

Second-year sociology major Mohsin Mirza expressed his support for STV and recommended that the Senate move forward with its implementation immediately, by way of an amendment to the Elections Code bill on the table that evening.

“[As] outgoing senators, you’re not as invested in elections as the senators who just ran are, so you’re more likely to be more open-minded about this,” Mirza said.

Ultimately, the Senate voted 15-2-1 to pass the Elections Code bill, with amendments striking out both the change in party budgets and the stipulation that Elections Code must be passed by week 7 of spring quarter. The goal of eliminating this deadline is to give the Senate more time to consider the possibility of implementing STV as a new voting method.

As Student Lobby Treasurer, Mirza also protested the change to Student Lobby legal code on the table that evening. He specifically objected to the appointment process outlined for Student Lobby officers, in which co-directors for the group are recommended by the External Vice Presidents of Statewide and Local Affairs (EVPSA and EVPLA) and confirmed by the AS President and the Senate.

“There’s two senators here at least who are [involved in] student lobbying, and they’re not supportive of this change either, so it would be very problematic if AS as whole changed something against Student Lobby’s own will,” he said.

Theus, one of the bill’s authors, felt the changes would encourage more lobbying efforts within the group. He also claimed that though a meeting had been scheduled between Student Lobby, AS President Jonathan Abboud, and EVPSA Alex Choate, members of the group failed to attend.

Off-Campus Sen. Jimmy Villarreal also pointed out several positive aspects of the bill, including a lobby education program and increased collaboration with the executive officers.

“This would make [Student Lobby] work with the EVPLA and EVPSA, two offices [in which] lobbying is a big part of their job description[s] and what they do day-to-day,” Villarreal said.

Collegiate Sen. Lupe Zelada, a vice-chair for Student Lobby, said that the meeting referenced by Theus was not agreed upon, as certain members were not able to attend at the proposed time. She also emphasized the importance of Student Lobby maintaining the freedom to elect its own chairs, without the influence of the executive officers.

“It allows us to have a bit of a checks and balances with the EVPLA office as well as with the EVPSA office, instead of just giving them the full autonomy to choose and appoint [people] as the chairs,” Zelada said. “It’s something that’s actually made our Student Lobby one of the best Student Lobbies out of all the UCs.”

The Senate tabled the bill, to be discussed again at its last meeting of the year on May 21. It also passed “A Resolution in Regards to Responsibility in UC Investments,” which authorizes the continuation of efforts by a group working to implement a more socially responsible investment system at the University of California.