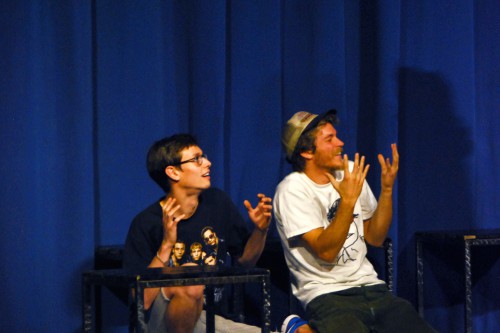 Every week, Improvability, the “premier comedy group” of the University of California, Santa Barbara, hosts their weekly improv comedy show at 8 p.m. in Embarcadero Hall. However, on May 23, approximately an hour and a half after the show began, a series of drive by shootings occurred nearby, resulting in seven fatalities and 13 injuries.

As usual, numerous students were in attendance at the improv comedy show, in addition to adults and several children. Soon after getting word of the shooting, Improv-er Henry Raschke said, “We have an announcement,” before being urged not to disclose any information about the incident until after the show. As the crowd and I did not know what was going on outside the walls, I continued to pay attention as the show continued.

The show, themed “UCSB vs. Cal Poly,” included students from Smile or Not, the student improv group at California Polytechnic University, San Luis Obispo. The show was organized as a competition between the two groups, in which Improvability would perform, then Smile or Not would follow (or vice versa). After each round of performances, the audience would vote on which group they thought was funniest.

In several games, Improvability was able to integrate Smile or Not seamlessly into the show. While most of the show involved the two teams competing to be deemed funnier, a few games called for every member’s participation, bridging the gap and uniting two schools who are, traditionally, rivals.

The show was absolutely hilarious, with sketches including “Game Master,” in which one Improv-er dictates what another does, much like the narrator of a video game, and “Gaston,” a variation of the “Beauty and the Beast” song. Despite the tragedy, the show went on flawlessly, keeping the audience at bay and entertained until the night was through.

When the performance finally ended and the audience began to rise from the seats to exit, Shelby Geitner announced that they were unable to allow us to leave the building, as there had been a shooting in Isla Vista, and Embarcadero Hall was now on lockdown.

When chaos and tragedy struck Isla Vista that night, the members of Improvability managed to stay at ease. After a screening of the 2004 kid-friendly film, “Shark Tale”–which was supposed to be the prize for whomever won the competition–Improvability continued to entertain the audience with their variety of comedy games. This time, however, they called for audience participation, which made the experience of being kept indoors more comforting, as students were able to watch their friends act foolish onstage.

Though the Isla Vista shootings occurred while Improvability was still going on, the cast continued the show and was able to keep the audience at bay until we were given the all-clear to leave. Those who lives on campus were urged to return to their dorms, while those who lived in IV and were at Improvability that night were encouraged not to return home. Instead, they were directed to sleeping arrangements in Santa Rosa Hall for the night.

This incident exemplified the ability of students to come together to comfort not only their peers, but also local adults and even children, who were surprisingly calm despite the circumstances. Improvability’s performers are Gauchos first, comedians second, and they treated the horrific tragedy professionally with the most respect possible.