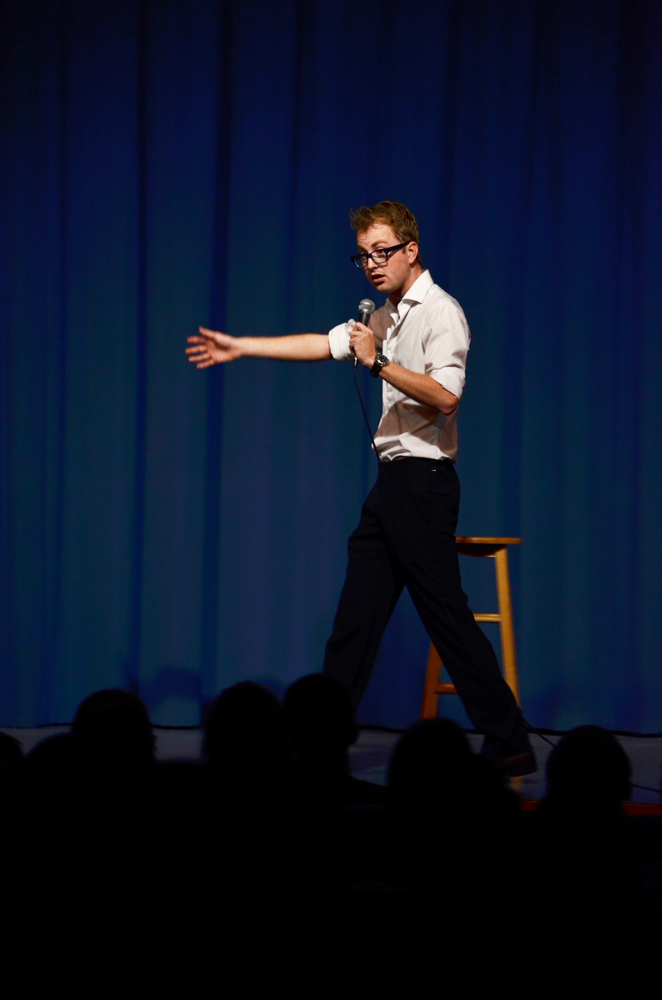 Laughology, University of California, Santa Barbara’s weekly stand-up show, offered a night of insanely funny stand-up performances, featuring comedian Todd Glass, on Saturday, May 10, in Embarcadero Hall. Laughology presents prestigious headliners who have been featured on networks like Comedy Central and HBO, as well as regular performers at some of the top comedy clubs. Glass’ performance fully demonstrated what the Los Angeles Times referred to as his “freewheeling style and quick wit.”

Glass went through his set with incredible high-octane energy, dominating the stage and engaging the crowd as he gave his hysterical thoughts on the K-Mart and Target war, infomercials, airplanes, Twix bars, and just about everything else. Glass’ comedy blends observational humor with an absurdly spirited performance, and he was quick to acknowledge his own irreverent and unpredictable energy. “He was funny, but it was a little too much towards the end,” said Glass, giving his impression of what someone would be saying after that night’s show.

There were many highlights in Glass’ performance, like when he perfectly described how K-Mart’s cluttered aisles pale in comparison to Target’s basic cleanliness.

“Target is basically K-Mart if they actually gave a sh*t,” he said.

In a brilliant display of his talent as a performer, Glass discussed his fascination with infomercials, even giving his own fast-paced infomercial for the ShamWow, the towel that he said was so absorbent it could even mop up other ShamWows.

But what was perhaps the most talked-about bit of the night was when Glass started working the crowd in his own unique way. Instead of insulting or poking fun at the people in the audience, Glass simply went up to different people and sang compliments to them. Singing “There’s nothing the matter with you” and other genuinely nice compliments like “You seem very nice” or “You look like you work hard,” even bringing up a member of the front-row to continue singing in his place for a while. After over 30 years of performing stand-up, and after many television appearances, his style remained incredibly entertaining and hilariously relatable, even for the young college-aged audience at Laughology.

Opening the show was comedian Daniel Kinno, who has performed stand-up on MTV and at the Just for Laughs Comedy Festival in Montreal. Kinno shared his views on dating and relationships, giving his take on every aspect of the dating process, and how social media has completely changed the dating game. He considered what a world without Facebook would be like and how we would have to hire a private detective to do all the things Facebook does, such as finding out what your ex currently looks like, who she’s taking pictures with, where she’s going, who she’s going with, and then gathering all possible information on them.

Following Kinno were UCSB students past and present. First up was Jacob Acosta, who jokingly congratulated the audience for abandoning their moms for the Mother’s Day weekend. Acosta told an entertaining story about his experience using a single-person public restroom as a 10-year-old kid and being awkwardly walked-in-on by an older man.

Following Acosta was Benji Lampel, who discussed life in Isla Vista and told a hilarious story about an uncomfortable exchange with an IV police officer. Next, Bill Buescher came out with a great joke about trying to describe the taste of breast milk, finally concluding that “breast milk is the one thing we’ve all tried and yet none of us know what it tastes like.” Ian Davis followed with his silly musings on dentists and how brushing and flossing every other hour isn’t even enough to gain their approval–there’s just no pleasing those guys.

Overall Impression: Laughs were in abundance, and a fine time was had by all.