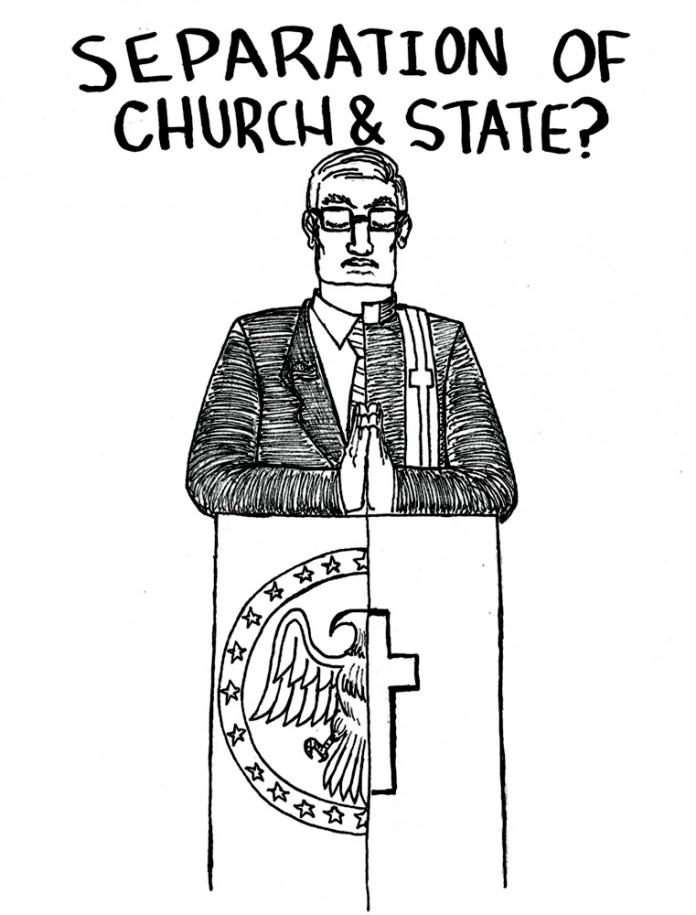 “We thank you, Allah, for the opportunity to be here. Okay then, first on the agenda…”

How many residents of Greece, N.Y., would feel awkward and excluded if the opening prayer to their town board meeting was routinely given by an imam? How many would claim infringement on their religious liberties and violation of the First Amendment? The Supreme Court recently ruled that the town’s legislative session’s opening prayer, which is pretty much always overtly Christian in nature, is constitutional and does not cross any lines into unacceptability. I beg to differ.

Justice Anthony Kennedy, writing for the majority, stated that “[a]s a practice that has long endured, legislative prayer has become part of our heritage and tradition.” Regardless of how much legislative prayer is steeped in tradition, this is certainly not a reason for ruling in favor of it. Many other unwarranted practices in the United States that left others feeling excluded or actually excluded, such as segregation and barring women from voting, were a part of our heritage and tradition that were abolished without regard to this status. Tradition does not determine a practice’s acceptability.

Additionally, the conservative majority argued that ruling against the prayers would mean the government and courts would “act as supervisors and censors of religious speech.” Not quite. Individuals would still be free to express religious speech on their own behalf—just not in the capacity of a government entity. Ruling against the prayers would not entail suppression of religious freedom, but would create a neutral space where no one is subject to religious rhetoric they don’t agree with. No single belief would be elevated or deprecated.

Another important aspect of the majority opinion is that no one is coerced into the prayer, which is technically true. But when atheist or non-Christian attendees are encouraged to participate, even knowing that they’re not technically being coerced does not make much of a difference in the reality of their feelings. As an atheist, I can easily imagine the awkward feeling that would result: watching everyone being encouraged to bow their heads as a prayer that I don’t think reflects reality is used to open a nonreligious legislative session. People may be actively welcomed to join, but it’s not hard to imagine how some people may still feel excluded at hearing a prayer that is explicitly out of line with what they believe. It could conceivably make some people feel like they don’t belong in their own town’s legislative meeting. And a meeting as fundamental as this kind should be made to feel as inclusive and comfortable as possible for anyone who wishes to participate in their local government.

The Court’s majority opinion takes a pretty outdated view of society and religion. A couple hundred years ago, the First Amendment and separation of church and state would have referred to–in the overwhelmingly religious, Christian society–accepting whatever Christian denomination one wanted to embrace and not using the Bible as a basis for our governmental decisions. Demographics, believe it or not, have indeed changed just a tad since then. The U.S. is now a true melting pot of wildly differing religious beliefs, and it only makes sense to update our interpretation of the First Amendment and the separation of church and state to reflect this. In addition to the greater diversity in America, we are becoming more and more aware of the old social norms that have been informing opinions like the Supreme Court’s. In a country of greater multiculturalism where we realize that a homogenous, Christian society’s traditional norms are outdated, we should expand the definition of separation of church and state so that religious belief will not make others feel excluded or awkward and won’t impose its morals onto government business. A legislative session opening prayer that provides a truly neutral, inclusive atmosphere for everyone who wishes to participate—the only acceptable atmosphere—is one left unspoken.

While the University of California, Santa Barbara is a fairly inclusive, thoughtful place, we can all still benefit from learning the lessons the majority of the Supreme Court has yet to. Much of the misunderstanding that can happen between students here can be remedied by realizing that not everyone embraces the same social norms. Exploring culturally diverse classes and attending multicultural events are two great ways to further open up our minds and help eliminate any feelings of exclusion in our peers so that we can create as fair a campus as possible.

A Grader’s Perpective by Lynnea Dally