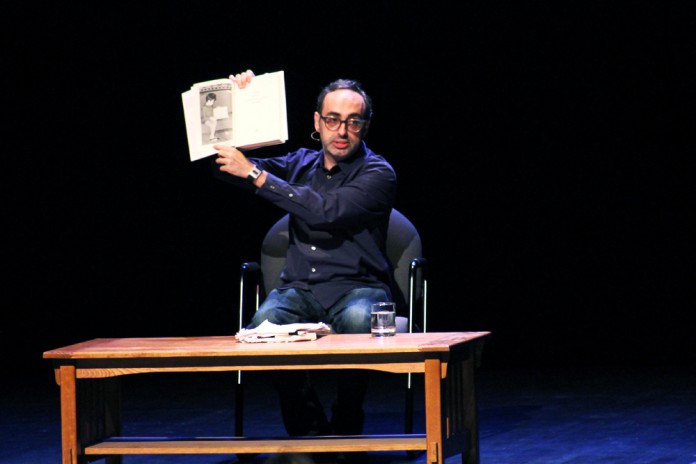 University of California, Santa Barbara’s Arts & Lectures, in partnership with the Interdisciplinary Humanities Center, hosted “An Evening with Gary Shteyngart” on Thursday, April 10, at Campbell Hall. This event, co-sponsored by the Writing Program, is the first segment of IHC’s Writer-In-Residence Series.

Shteyngart, a world renowned satirist and a humorous, insightful novelist, gave readings from his gripping January 2014 release, “Little Failure: A Memoir.” This novel has caused fans new and old to realize that it is our failures as well as our successes that make us who we are–and life is easier if you laugh.

Introducing Shteyngart was IHC director Susan Derwin, a professor of comparative literature as well as German, Slavic, and Semitic studies at UCSB. Before describing Shteyngart’s multitude of accomplishments, Derwin elaborated on the purpose of the Writer-in-Residence series, saying it is “to engage with some of the very best contemporary practitioners in the field of writing.”

The Writer-in-Residence series, supported and made possible by local residents Diana and Simon Raab, will introduce a new writer–from journalists to filmmakers to creative writers and humanities scholars–to UCSB every year.

Shteyngart began his presentation by introducing his recent book, “Little Failure: A Memoir,” the name of which was inspired by his mother, who called Shteyngart a “little failure” upon seeing his rundown apartment on the Lower East Side. While the book recounts numerous stories from Shteyngart’s past 40 years of life–he is 41 and admittedly just learned how to drive–it also contains a variety of personal photographs. Though he poked fun at the hardships he repeatedly endured, he always reiterated his passion for language, and made sure to establish that while his book may read like his other satirical novels, it is, in fact, a memoir.

“This book is really about how I became a writer,” said Shteyngart.

Born to a Jewish family in the 1970s, Shteyngart was subjected to eight years of Hebrew school upon relocating to the United States from Leningrad. He described his days in school as rough, due to the differences between his peers and himself, explaining the cultural barrier and his family’s financial distress through humor.

During his childhood recollections, he reverted back to a Russian accent and displayed his parents’ cynicism with every impression.

“If I don’t think in Russian, then it doesn’t sound real,” said Shteyngart.

This multilingual texture made his storytelling unique, allowing the audience to experience and identify with the multi-faceted and highly unconventional layers of Shteyngart’s life.

Shteyngart attributed the origin of his love for writing to his grandmother, who would pay him one piece of cheese for every page he wrote. As the years passed, he encountered several people who both inspired and influenced several of his works, including a sixth grade substitute teacher, Miss S., who called on Shteyngart to read passages out loud from his science fiction novel, “The Challenge,“ every day.

“You will always have a little bit of that alien inside you, and that’s where I think science fiction and pessimism come out,” said Shteyngart.

Upon initially listening to Shteyngart, I was very shocked by his blatant use of profanity and his pessimistic, sarcastic tone. However, as the evening progressed, I came to realize that his composure (or lack thereof) is simply how he presents himself stylistically. Shteyngart’s lack of censorship and gritty, raw confessions are his way of not only sharing himself with the world, but also internally making sense of the world he grew up in.

“My book isn’t a satire; it’s a memoir. But I like having a safety net of humor relief. I think that [my writing] should be entertaining,” said Shteyngart.

Shteyngart’s books are published through Random House, and he says that he, thankfully, is still paid in cheese.