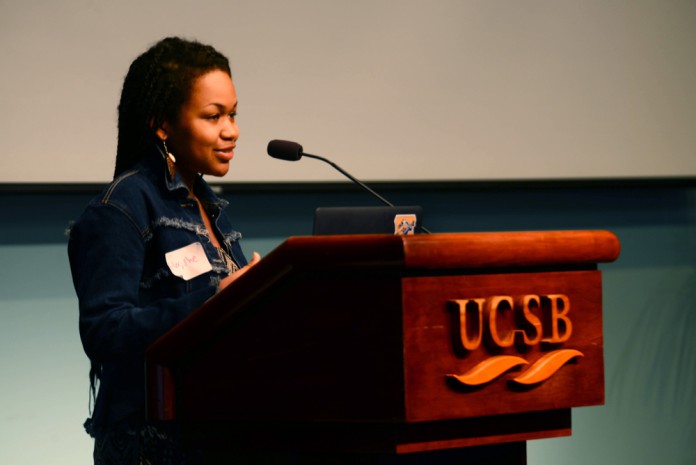 In an evening consisting of student leaders, spoken word performances, and a keynote speaker–with enough encouraging smiles and words of wisdom to fill every lecture hall on the University of California, Santa Barbara campus–the Associated Students Womyn’s Commission hosted the Womyn Unite Banquet at UCSB on Wednesday, April 9.

Springtime air crept into Corwin Pavilion, allowing each member of the audience to smell the savory aromas of the buffet all the way from their seats. For those seated, the circular tables helped foster an atmosphere of communication and the sharing of thoughts. Empowering Top 40 tunes erupted from the speakers, and men and women alike bonded over their mutual memorizations of the lyrics.

During this time, a slideshow played, which included pictures, descriptions, and quotes from inspirational women ranging from Frida Kahlo to Ellen DeGeneres. Among the featured ladies were several on-campus mentors, including resident advisors, teaching assistants, and professors.

The main purpose of the banquet was to unify the women of UCSB. Through singing along to well-known songs,  bonding over the on-campus women featured on screen, and participating in ice-breaker activities, the attendees began the night by forming connections with their peers.

Among the student speakers was Diana Torres Luevanos, a second-year biology and anthropology double major with a minor in education, who is the president and co-founder of Girl Up. Girl Up, a United Nations organization with chapters at the high school and university level, advocates for the education, safety, and empowerment of young women worldwide. The UCSB chapter in particular seeks to provide relief for young women in Malawi, Liberia, Ethiopia, and Guatemala.

Born into a “machismo” family as the youngest of nine children, Luevanos knew that if she wanted to make a difference in the female community, she needed to break free from the traditions of her family. Luevanos has been an activist since the age of 14, and she continues to fight for women’s rights through on-campus programs.

“I feel that we are the ones who get left behind,” said Luevanos. “I am tired of being degraded. I want to cause change in this world, and I hope you join me.”

Currently, Luevanos is working on a campaign entitled Stop & Listen, in which she encourages young people to pay attention to the lyrics of the songs they listen to, many of which degrade women.

After four performances by members of the Winter 2014 spoken word class–each of which was equally raw and confident–keynote speaker Hareem Khan graced the stage. A graduate student in the anthropology department at UCSB, Khan’s research consists of colorism, which she defines as “social hierarchy based on gradations of skin color within and between racial ethnic groups.”

In her presentation, Khan showed several Indian advertisements calling upon women to purchase skin lightening products. She described the companies as displaying images that indicate society’s preference for lighter skin.

Khan, Luevanos, and the other board members of Womyn’s Commission agree that society’s representation and perception of women need to improve.

“We all need to be working together to create change on this campus,” said Cassie Rubio, a second-year global studies and comparative literature double major and “Her-storian” of the Womyn’s Commission.

The Womyn’s Commission welcomes new members from all backgrounds and gender identities. For more information, attend weekly meetings on Wednesdays at 5 p.m. in the Middle Eastern Resource Center in the SRB, or visit Facebook.com/WomynsCommission.