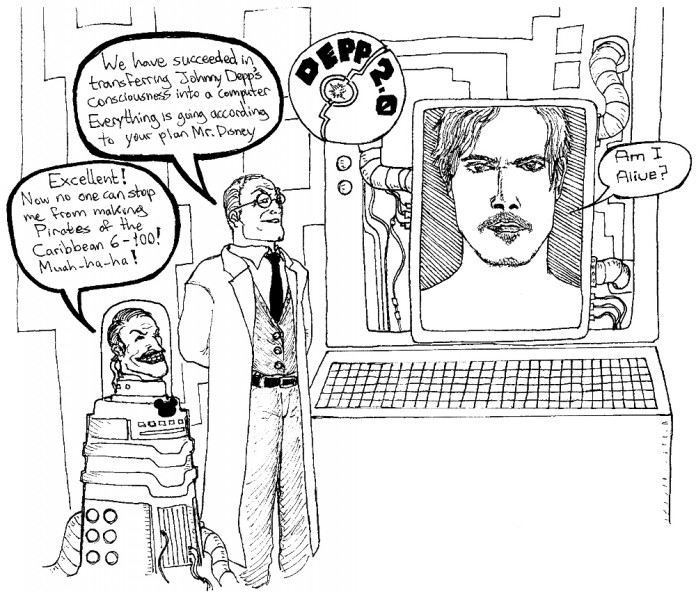 Imagine a world ruled by computers–but one in which humans aren’t their slaves. A world in which humans finally achieve the long sought after immortal life. All this could be possible, through the transfer of the human mind into an artificially intelligent being.

In this day and age, a world such as this does not seem as implausible as it once might have. Several movies–such as “Avatar” (2009), “Source Code” (2011), and, most recently, “Captain America: The Winter Solider” (2014)–feature people who have transferred their minds into an external being, either organic or inorganic. The idea of living vicariously through a computer is becoming more common as technology, and artificial intelligence specifically, continues to advance to higher and higher levels.

The upcoming movie “Transcendence,” starring Johnny Depp, explores the concept of life through artificial intelligence. Depp plays Dr. Will Caster, a leading researcher and later test subject in the quickly advancing field of artificial intelligence. After an assassination attempt by a group of anti-technology radicals, Caster’s wife places his consciousness in the very technology he helped create. The rest of the movie explores what living through an inorganic being might be like, and whether or not one’s humanity is preserved even when his or her body is lost.

Several real-world leading scientists in the artificial intelligence field believe immortality is mere decades away. At the second annual Global Future 2045 Congress, attended by hundreds of scientists and journalists, the event’s organizer, 32-year-old Russian millionaire Dmitry Itskov, pushed the theme of transhumanism, in which humans merge with machines. According to Motherboard, Itskov’s goal is to eventually allow humans to download digital copies of themselves into android bodies, which he calls “avatars.” The prospect of living in immortal metal bodies opens up many possibilities for the extension of the human race; for example, imperviousness to natural disasters and immunity to all forms of disease would be just a couple benefits to trading in one’s flesh and blood for a metal skeleton. Additionally, android bodies that do not require food, water, or oxygen make planetary colonization much more feasible.

If immortal android bodies make your mind wander uneasily to the events of the “Terminator” films, fear not. Many other scientists believe Itskov’s plan is merely a fantasy–something feasible, but also many years away. Currently, artificial and prosthetic limbs are just starting to be able to allow sensation. The Geminoid robots for example, created by Professor Hiroshi Ishiguro at Osaka University, look eerily similar to real humans, complete with hair and a material that resembles human skin. However, they lack artificial intelligence and must be controlled remotely through motion sensing of a human avatar.

According to IEEE Spectrum, Geminoid will be used mostly for studying human-robot interactions, in part human relations with a robot that looks just like a human. And while this is an interesting development in the field, it seems that this may be the current extent of humanity’s personal interaction with machines. Theoretical physicist Stephen Hawking has faith in one day being able to transfer a brain outside of a body, but believes this day is very far off, and says, “I think the conventional afterlife is a fairy tale for people afraid of the dark.”