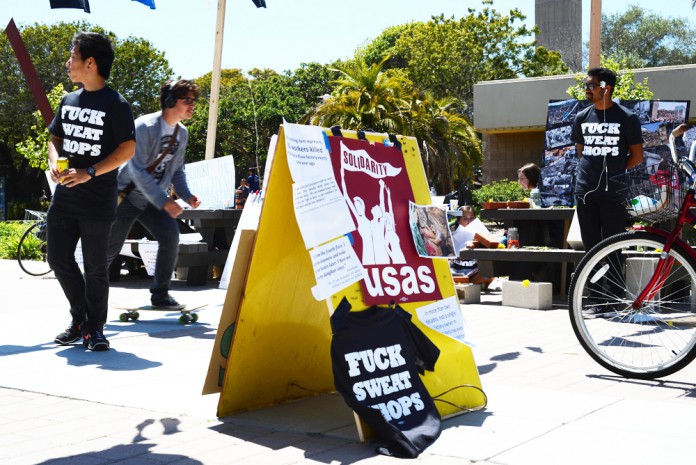 One year ago from last Thursday, April 24, over 1,000 people lost their lives in the catastrophic collapse of the clothing factory in Rana Plaza in Dhaka, Bangladesh. The anniversary of the disaster has sparked international demonstrations appealing for increased safety standards, better wages, and superior working conditions.

The University of California, Santa Barbara chapter of United Students Against Sweatshops (USAS) organized a demonstration outside of Davidson Library to raise awareness of the Rana Plaza building collapse. Over the walkway, USAS hung shirts of clothing companies that were made in the Rana Plaza building in order to how many clothes people wear that are made in factories.

“Some companies simply do not care about the safety of their workers,” said USAS member Clara Perez, a second-year English and sociology double major.

The Rana Plaza building collapse was not an isolated incident. Since 1990, 50 major factory fires have been reported in Bangladesh, killing a total of around 400 people, according to the International Labor Rights Forum. Many companies have signed documents pledging to provide support to victims and their families, and the Bangladesh government has also promised to act.

“The failures of the textile industry can be blamed on two things,” said Daniel O’Connor, a fourth-year global studies major. “Government corruption and corporations’ decisions to always move to the cheapest source of labor. This ‘race to the bottom’ is a big problem globally.”

Bangladesh’s economy relies heavily on the garment industry, which employs about 4 million people. Workers make around $37 monthly, according to Time magazine. Additionally, according to a 2011 study by the Department of Labor, over 10 percent of children aged 5 to 14 work full time in Bangladesh. Some of the workers who died in the recent collapse were, in fact, children.

More than 1,100 people died in the Rana Plaza disaster, making it the deadliest building collapse in modern times. Sohel Rana, owner of the building, has been behind bars since the incident, but many still feel that the garment industry has not changed enough since the tragedy. According to The Guardian, thousands of demonstrators marched on Rana Plaza on Thursday, chanting, “We want compensation!” and “Death to Sohel Rana.”

“Most of the clothing we purchase is connected to a sweatshop at some point,” said second-year global studies major and USAS member Kaylena Katz. “The solution is not just to be conscious of where you buy your clothes, but to force corporations who work with these factories to take responsibility and pay to make sure the factories are safe for the workers.”

USAS is a national student labor organization with a presence on over 150 university campuses, according to their website. For more information on USAS and their practices, visit usas.org or facebook.com/usasucsb.