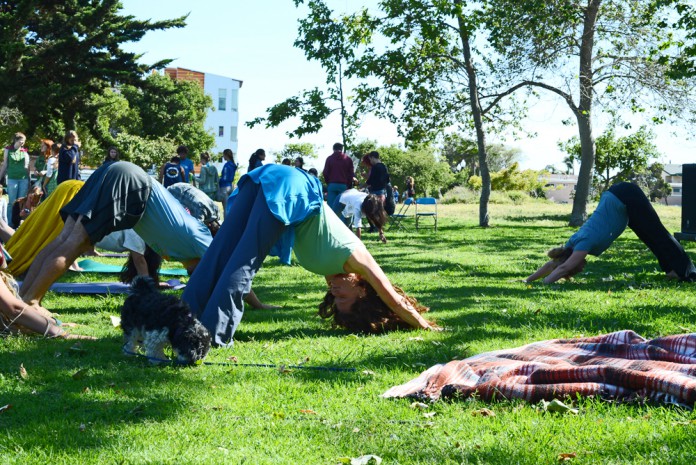 Isla Vista’s most rocking bands performed at People’s Park in honor of Mother Earth on Saturday, April 26, for the IV Earth Day Festival. The festival was organized by the Associated Students Environmental Affairs Board and featured local vendors, environmental activists, and impromptu yoga instruction, all backed by performances from Naked Walrus, Yancellor Chang, All Mixed Up, and standout sets by Sun Daes, That’s What She Said, Platform Holly, and The Olés.

The festival began with the self-described “intricate surf rock” renderings of Sun Daes. Their unabashed West Coast charisma rallied the crowd while their brightly reverbed tunes matched the weather with a sunny style that whirled moods up higher than the day’s gusty winds. The band burned it up with their performance of their original song “Pyro”; the wipeout wailing of second-year biology major Max Goldenstein tuned in perfectly with the reverbed strummings of guitarist Gabe Poissant, a second-year art major, and the temperate bass lines of JD Severino, a second-year environmental studies major. The group’s cohesion and musicianship was unmistakable throughout their set as the deft drumming of Jared Payzant, a second-year film and media studies major, set an upbeat rhythm for the day.

The festival continued with the female frenzy of That’s What She Said. The harmonious pop-punk dynamic of the all-girl group made a truly worthy offering to Mother Nature with the mesmerizing vocals of Marie Stassinopoulis, a third-year psychology and sociology double major, and the tastefully subdued lead guitar of Angelica Baird, a third- year communication major. The band wasn’t afraid to temper the atmosphere with their original song “One More Night,” a wonderfully harmonious slow-jam, smoothed out by the powerful bass of third-year psychology major Devon McNaughton. After the performance, Stassinopoulis commented that “the crowd was mellow,” a state most directly attributable to That’s What She Said’s naturally engaging presence.

The character of the festival was envisioned in the performance of Platform Holly; a charming composite of classic rock, reggae, pop, and indie style. The band bridged the gap between Hendrix and Sublime with an unmistakable intent to deliver for the Earth Day crowd. The tie-die ensemble of lead singer Patrick Fitzpatrick, a fourth-year environmental studies major, reflected the attitude of the music while the group’s performance of their original song “Live it Up” proved their sureness to jam out in the happiest way possible.

The day built up to The Olés’ standout performance, which definitely got people standing up. The Isla Vista powerhouse blasted out the border between funk and reggae while the sunshine faded and the excitement grew bolder. Dance moves were declared as bare feet stomped out the tempo and kicked up the excitement. Nothing trumped the trumpet solo on 2Pac’s “California Love,” and the rollicking ratio of brass to bass punctuated the Earth Day Festival like a biodegradable bullhorn.

People’s Park held a great festival, and with the performances nearing their end, the booths boxed up and the crowd diminished. All that remained was the necessary reflection on the earthly eminence of Isla Vista’s local bands.