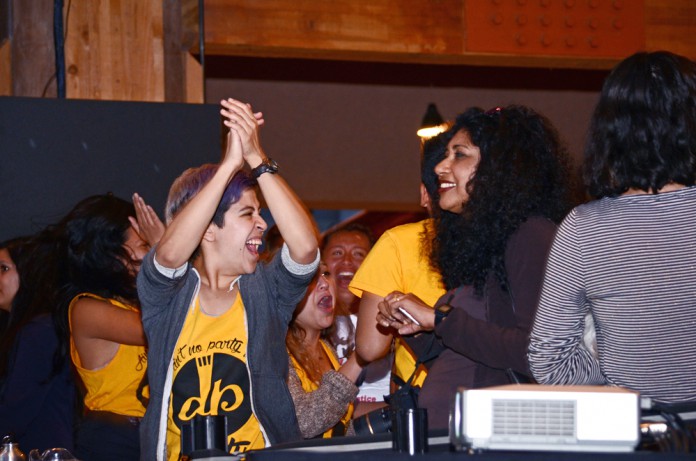 The Open People’s Party (OPP) took all but three seats in last week’s Associated Students elections, which had a 37.16 percent voter turnout (6,684 students). Sweeping the partisan executive positions, OPP candidates also took a heavy majority in the AS Senate, joined by one independent candidate and one Democratic Process Party (DP) candidate.

For the second straight year, OPP came away with almost every electable seat. Independent candidate Bailey Loverin was elected Student Advocate General, a position that cannot be pursued by a representative of any political party. OPP candidates Angela Lau, Beatrice Contreras, and Melvin Singh won Internal Vice President, External Vice President of Local Affairs (EVPLA), and EVP of Statewide Affairs, respectively. All lock-in fee reaffirmations passed, in addition to new fees for a composting program and Queer Commission (QComm). New fees for the creation of a sobering center, the expansion of the University Center, a university “senior book,” and “The Catalyst” literary arts magazine did not pass. Third-year psychology and sociology double major Ali Guthy was elected AS president, defeating DP’s candidate Navkiran Kaur, a third-year black studies and sociology double major. President-elect Guthy has already laid out some primary goals for her term. “One of the big projects I want to work on is establishing a student-run cafe to create more campus jobs, more 24-hour study spaces, and more affordable, healthy alternative eating options,” Guthy said. Additionally, Guthy plans to make AS more easily accessible to the common student. “I hope to implement a new budget display on our website that allows all students to view, line item by line item, how each facet of the association is spending their fees,” Guthy said. Despite her loss to Guthy in the election, Kaur vows to remain involved at the university. “I will continue serving students as I have during my last three years here,” Kaur said. “I will probably continue some form of student affairs work alongside campus organizing.” Kaur had a negative assessment of the elections, citing the near sweep and a lack of complete representation. “I think we should, as students, be very critical of Associated Students and this elections process,” she said. “I also think it is unfortunate that voter turnout was so low this year.” Guthy viewed the voter turnout differently. “It was really great seeing a strong voter turnout this year after all the candidates’ tireless campaigning and outreaching for two weeks straight,” she said. Additionally, Guthy “hopes the enthusiasm for Associated Students doesn’t end with this election cycle, but rather continues to grow.”