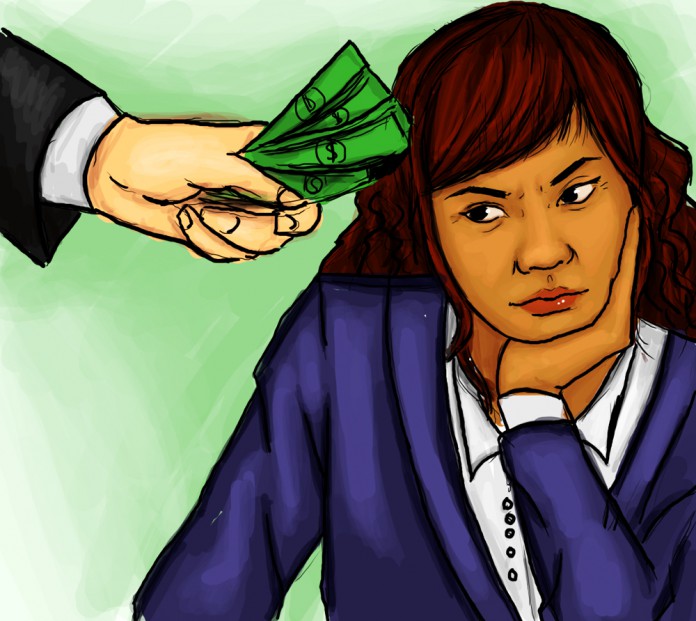 Nobody can say with a straight face that there is no income disparity between men and women in the United States; all signs point to blatant divergence.

The Paycheck Fairness Act is an attempt to address this very issue. It is proposed legislation that is trying with all of its might to add additional protections to the Equal Pay Act of 1963 and the Fair Labor Standards Act of 1938.

On Tuesday, April 8, Obama took the floor and delineated how the bill would prohibit reprisal from federal contractors against employees who share their salary information. The bill would additionally require the Department of Labor to collect wage data from employers–broken down by not only gender but also race–which would in turn disclose more details about the wage differentials between men and women in the same jobs. The bill would complement previous legislation by adding procedural transparency to the ultimate goal of achieving wage equality.

So does this not seem like a great idea? Would it not ensure equality across genders with respect to work and wages–a milestone we’ve apparently been trying to reach since 1938? I guess not, because on Wednesday, April 9, ABC News reported that the act was blocked again (as it had been in 2010 and 2012) by a Republican filibuster in the U.S. Senate.

A nail in the bill’s coffin might have been Rep. Lynn Jenkins (R-Kan.), the GOP conference’s chair, and her strong assertions that the Democrats’ push for pay equity between men and woman is “condescending.” According to the Huffington Post, she stated, “Many ladies I know feel like they are being used as pawns, and find it condescending [that] Democrats are trying to use this issue as a political distraction from the failures of their economic policy.”

In response, I have to say I’m a little confused. I’m sorry, Lynn, that you find it degrading that the administration is looking to equate your salary with the men you stand next to. You’re basically crossing your arms to the bill because you feel you’re being pitied. Pity or not, what this solution is a response to is the persistent and subtle misogyny that has pervaded women’s working lives. Are you really going to stand there and say something akin to “I don’t want your charity?” Also, using your own logic, doesn’t it seem a little “condescending” of you to distract everyone from supporting a bill for a specific issue by arguing that the bill is distracting everyone from the real problems with the administration?

Coming in right behind Jenkins was Majority Leader Eric Cantor (R-VA) who critiqued the often-used statistic of women getting paid 77 cents on the dollar as compared to men and insisted studies reported it was in fact 88 cents. The Huffington Post reported that he also interjected that it would be more effective to enforce old laws rather than passing new ones.

Statistics-wise, the most recent official statistics that were released from the Bureau of Labor Statistics survey for 2012 state that the real figure for median usual weekly income of women compared to men is 81 cents on the dollar. So on that note–both sides are wrong. But do you know who is still losing? Women. The many contradicting statistics about pay equity is not the point; the ultimate point is that all of these numbers are less than 100 cents on the dollar. Eighty-one percent is a B-; imagine getting a B- on every exam while the guy next to you gets the same score and gets 100 percent.

With respect to Cantor’s comment about previous legislation, many loopholes have been poked through the preceding acts, specifically with the interpretation of “factor other than sex” defense. Moreover, if we already have this legislation, why has the situation not been completely solved? Those laws did contribute to a significant drop in discrimination, but we’ve reached a plateau and it’s clear something further must be done.

The Paycheck Fairness Act at its base level is an attempt to right a longstanding wrong. The income gap between men and women for the same exact jobs is an actual problem that needs an actual solution.