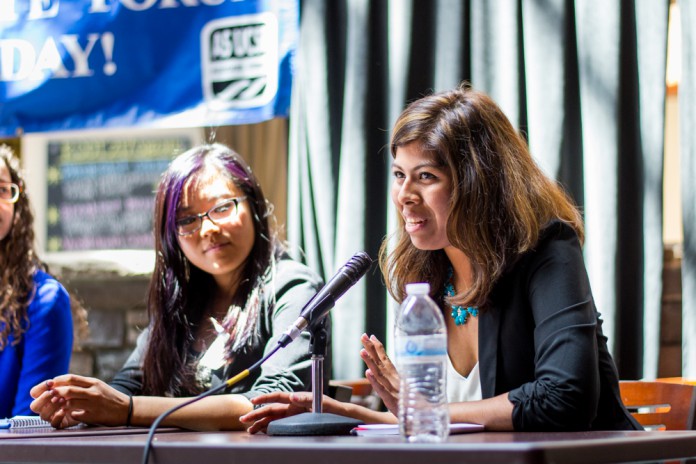 The first of a series of forums featuring the candidates for positions in Associated Students took place at The Hub on Monday, April 14. Candidates running to represent the student body as off-campus senators at the University of California, Santa Barbara for the 2014-2015 year kicked things off.

Candidates representing the Democratic Process Party (DP) and The Open People’s Party (OPP) were both present to answer questions before the election. They voiced their stances on Deltopia, undocumented students, increasing diversity, increasing student fees, and boosting student involvement in AS. The forums are held throughout the week, and elections will take place on GOLD from April 21 to 24.

The second half of Monday’s off-campus senators forum concluded with candidates with last names beginning with L to Z. Representing OPP were Brandon Lee, Cassandra (Cassie) Mancini, Charles Lopez, Erika Martinez, and Michelle Moreh. The DP party had three candidates: Jacob Lebell, Jeremy Peschard, and Xin Ma. All candidates, if elected, hope to use their institutional power and the resources AS provides to make changes to strengthen the UCSB and Isla Vista community.

“Being an off-campus senator would allow me to help as many people as I possible,” Peschard said.

“Anyone can advocate for change,”Lopez added, “but in AS, your voice carries a little further.”

The recent events that occurred in Isla Vista during Deltopia made the annual event a popular topic for discussion, and gave candidates the chance to convey their various positions on the issue.

“We invited these out of towners,” Mancini said.

She cited miscommunications with the police as one of the causes of the violent response from party-goers. Moreh agreed and said, if elected, she would push for the creation of a police advisory board.

“IV looks a lot like a slum,” Lebell added.

Lebell and Ma, both for the DP party, pointed out structural issues within the IV community and expressed the need to take better care of our community and do more to really make IV feel like “our home.”

“There needs to be more lobbying so they know we are united in our stance on undocumented students,” Lee said.

Lee, as well as Moreh and Lopez, spoke about the need to push the issue beyond UCSB and establish its prevalence in the UC system as a whole.

“Together we can be a very powerful voice,” Mancini said, advocating for the coalition of AS units and Office of Student Life groups around campus.

“[There should be] mandatory diversity training for students, TAs, RAs, and faculty,” Peschard added. “Discrimination shouldn’t be happening in a place where people should feel safe.”

Additional student fees that would be allocated toward renovations of the MultiCultural Center and the University Center that will appear on the upcoming ballot were also discussed. Much support was expressed for the MCC fee, as the discussion tied into increasing diversity on campus. Support for renovations of the UCen were centered around the empowerment of students.

All the candidates at the forum strongly urged students to vote, as the issues directly affect all UCSB students. Each of them spoke about their dedication to AS and the UCSB community, and urged everyone to participate.

“If we show them we care, students may want to care back,” Martinez said, and reminded everyone to vote on GOLD starting Monday.